By Matthew Miller
November 8, 2007
Sign in to view read count 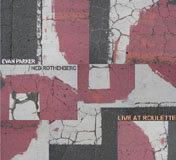 Multi-reedists Evan Parker and Ned Rothenberg have spent their careers challenging the accepted notions of jazz and music in general. It isn't a crusade or rebellion, but rather a personal search manifested in their vast and varied discographies, a relentless probing that characterizes much of Live at Roulette.

Recorded in October of 2006—and named one of the top ten shows of that year by AAJ-NY—the hour-long set is as absorbing as it is challenging. "Who Asked Racine opens the set with popped notes and multiphonic screeches, before Rothenberg's alto plunges to a beguiling whisper, instantly drawing Parker to the airy depths of his register before his tenor begins a wayward, dissonant ascent. It's the first of many instances of near extra sensory communication between the pair.

The album's five tracks—each averaging about ten minutes in length—are more accurately described as a collection of improvisational episodes. Impetus and response are nearly indiscernible on "Stick, Twist or Bust, a hypnotic performance pairing Parker's wry soprano with the woody resonance of Rothenberg's bass clarinet. The improvisation gains momentum and focus to a bubbling, contrapuntal section where a jaunty, low-register ostinato from Rothenberg sustains Parker's effervescent high-note runs. From this mid-performance climax, the duo somehow manages to build incrementally to an even higher plane, with Rothenberg's clarinet leaping back and forth, and finally joining Parker for a whistling conclusion.

Live at Roulette is certainly one of the most important releases of the year thus far and considerable consolation for those of us who missed the show.

Who Asked Racine?; Brew For The Birds; Stick, Twist or Bust; On Alto On Tenor; On Core En Cours.