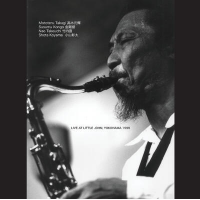 Four Japanese improvisers gather for an absorbing summit meeting in the Tokyo port city on Live At Little John Yokohama 1999. Probably the best known of the quartet will be tenor saxophonist Mototeru Takagi, who appeared on drummer Milford Graves' underground classic Meditations Among Us (Kitty, 1977) some 22 years earlier. There is a whiff of that session on this album too, as it also features three horns with percussion; Takagi is joined by reed players Susumu Kongo and Nao Takeuchi (who studied with Byard Lancaster and performed with Elvin Jones), along with drummer Shota Koyama (a veteran of the fiery Yosuke Yamashita Unit). However this is a slightly less combustible affair, lacking Graves' polyrhythmic orchestration and unremitting fire-breathing from the reeds.

Much of the time a conversational vibe ensues, often loosely organised around a tonal center although, happily, the collective dander rises on occasion too. Takagi, who died in 2002, piioted few leadership dates during his career, so the fact that he is at the front and center of this 73-minute live recording makes it a valuable addition to his discography. His burnished yet vocalized tone dominates the woodwinds' floating weave on the episodic 40-minute "Yokohama Iseazaki Town," with Koyama's responsive coloration and accents contributing to an almost airy feel at times. All the better, that sets off the passage at the halfway point, when Kongo and Takeuchi wield their saxophones and the piece explodes into a bristling three-way dog fight.

However, the highlight of the disc is the relatively brief 12-minute "Yokohama Yamashita Town," a masterpiece of controlled extemporization, where Takagi's majestic tenor saxophone squawk fashions a dirge-like melody, alternately cosseted and buffeted by Takeuchi's increasingly rambunctious bass clarinet and Kongo's wailing alto saxophone, atop brooding drums. The final "Yokohama Yamate Town" manifests in two halves, the first a showcase for the vibrant flutes of Kongo and Takeuchi (whose connection was vouchsafed by a duo disc Our Tribal Music (Vibration, 1997)), the second a more bombastic three saxophone conflagration, which nicely cleanses the palate and certainly merits the audible audience approval.