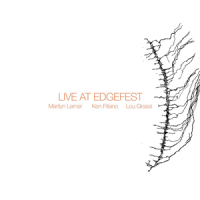 Three stalwarts of the improvised music scene combine to persuasive effect on the limited edition LP Live At Edgefest. An excellent sound allows Canadian pianist Marilyn Lerner and the NYC-based pairing of bassist Ken Filiano and drummer Lou Grassi to be heard as part of a truly egalitarian collective. A strong group dynamic is evident straight from the off and consistently on show throughout four freely wrought pieces. At times the discourse takes on a percussive dimension reminiscent of the Portuguese RED Trio, though the intersect here of jagged bow work, nagging piano phrases and pattering percussion is perhaps more informed by the jazz tradition.

On bass, Filiano confirms his position as a master of melodic invention. He's a key element of the band, primarily responsible for its distinctive flavor. His bass occupies the foreground as often as the piano, recalling Farmers By Nature, another stellar trio where the instrumental hierarchy remains resolutely fluid. Even when playing alone, he maintains a contrapuntal flow by alternating the registers. In contrast Lerner places less emphasis on harmony than many practitioners, instead favoring chiming figures and metallic patterns. Grassi's tuneful drums form the bedrock of a rhythmic carpet, demonstrating both restraint and encouragement.

"Rising On An Infrared Wave" opens proceedings in accomplished style, co-opting silence as another member of the ensemble, to be interspersed between pellucid piano ripples, slashing arco and tinkling cymbals. Eventually the colloquy congeals first into a stop start unison, then a concerted surge. Textural interchange occupies a prominent role, especially on "Open Cluster" in the dialogue between Filiano's abrasive sawing and Lerner's rubbing and scraping under the bonnet, which calls to mind Agusti Fernandez' celebrated expeditions inside the piano. On "Event Horizon" Grassi's intro leads to swirling trio interaction, Filiano's sweet nimble fingering latterly to the fore. Once he settles into a repeated vamp, Lerner initiates an incantatory spell, fuelled by rolling drums, in what proves the highlight of this fine date.