BY JEFF STOCKTON
September 10, 2007
Sign in to view read count 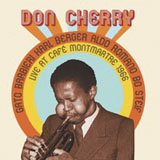 Don Cherry's career was unavoidably defined by his spot in the classic Ornette Coleman quartet of the late 1950s and early 1960s. When that group had gone as far as it could go, Cherry went on to bring the same sense of improvisational freedom to a brief stint with Sonny Rollins on Our Man in Jazz (RCA, 1962) and meet his free jazz match in a quartet with Albert Ayler on Vibrations (Freedom, 1966). Later, Cherry's omnivorous musical personality would lead him to create a jazz hybrid of African, Brazilian and Indian rhythms, European folk forms and anything else he heard, as he traveled the globe.

Live at Café Montmartre 1966 captures Cherry's quintet around the time of his short stay with Blue Note that yielded Complete Communion (1965), Symphony for Improvisers (1966) and Where Is Brooklyn? (1966) . The music-making is international, by definition: German Karl Berger (vibes), Dane Bo Stief (bass), Italian Aldo Romano (drums) and a youthful, short-haired, horn-rimmed Gato Barbieri (tenor). Thanks to his soundtrack for the film Last Tango in Paris, the Argentine would become a Latin jazz superstar, but at this stage, he was a perfect foil for Cherry, his tone throatier, more punishing and extreme than even that of Ornette.

Barbieri is a link back to Ayler, while Berger's vibes dance around the horns with Ornette Coleman's timing. The band is tight and well-rehearsed, which is perhaps more a tribute to Cherry's inclusive sensibility than the amount of time they actually spent on the bandstand. Each composition is presented as a "cocktail or suite, including a go at "Complete Communion, and combines familiar themes from Cherry's career that he couldn't help but mix together.

Cherry was never into categories or labels and his halting, tentative introductions to the tunes here indicate that he was more comfortable letting his horn and band do the talking. This CD represents just one marvelous, essential stop in the musical journey of this one-of-a-kind jazz griot.