BY DAN BILAWSKY
December 8, 2011
Sign in to view read count 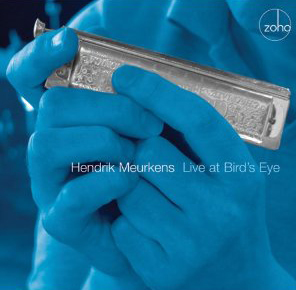 As a virtuoso harmonicist and vibraphonist, Hendrik Meurkens has always reigned supreme in the unique instrument doublers category, yet he never seems to get the attention he fully deserves. The German-born, New York-based Meurkens has been making beautiful and bouncy Brazilian-based music for decades with his instruments of choice, and Live At Bird's Eye is no exception.

For his fourth date on the Zoho label, Meurkens culled nine numbers from two different stints that took place eighteen months apart at the Basel, Switzerland club, but the consistency in sound, personnel, and quality make it seem like all the songs could have been recorded on the same evening. Bossa nova, choro, and samba are the subjects of the day, and Meurkens never fails to amaze in any of these settings. Meurkens-as-composer is covered with the title track from Sambatropolis (Zoho, 2008) and "Lingua De Mosquito," from Amazon River (Blue Toucan, 2005), while the lone American standard—a bossa take on "Body And Soul"—demonstrates his ability to recontextualize oft-covered material to his liking.

On the other two-thirds of the album, Meurkens mingles with his musicians in dwellings built by big-time Brazilian composers, such as Sergio Mendes ("Noa Noa"), Antonio Carlos Jobim ("Dindi" and "Voce Cai Ver"), and Joao Donato ("Minha Saudade" and "Amazonas"). Each number provides ample opportunity to demonstrate his skills on whichever axe suits the song, but Meurkens has plenty of help along the way. Meurkens' relationship with drummer Adriano Santos and bassist Gustavo Amarante, which is also documented on the leader's other Zoho dates, has created a cohesive sense of ensemble play that's always evident, as both men push and prod in all the right places. While this rhythm team brings buoyancy and a sublime sense of groove to the music, they largely avoid the spotlight, providing support as Meurkens and pianist Misha Tsiganov place their soloing wares on display.

The Russian-born Tsiganov proves to be the ultimate match for Meurkens, whether trading cute phrases with the harmonica maestro ("Lingua De Mosquito"), introducing a song with beauty and class ("Dindi"), or scorching with a fiery solo display ("Amazonas").

Longtime Meurkens fans already appreciate his talents but, for those unfamiliar with his work, Live At Bird's Eye serves as the ultimate entry point into his music, a vital aural curriculum vitae.