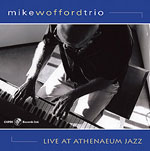 Pianist Mike Wofford has been a mainstay of the West Coast jazz scene for many decades and has been recording since 1966. Based out of San Diego, the location for this recording, he has been heard on many recordings as member of groups led by Shelly Manne and His Men, Shorty Rogers and James Moody. In 1979 he was chosen to be the pianist/musical director for Sarah Vaughan. Later, Wofford worked with Ella Fitzgerald, appearing on her final album and continuing with the singer until her retirement in 1994. Over the years, Mike Wofford recorded under his own name for such labels as Discovery, Concord and Milestone, including a three volume appreciation of the Jerome Kern Songbook in a trio and quartet setting.

Athenaeum Jazz represents a series of concerts over the past fifteen years at the Music & Arts Library of La Jolla. Wofford has appeared there many times, but usually in the company of groups led by Art Farmer, Bud Shank, Lee Konitz and others. This album is the first Athenaeum concert to be recorded. For this occasion, the pianist chose some highly regarded East Coast pals for his rhythm section: in-demand bassist Peter Washington and veteran drummer Victor Lewis.

Mike Wofford has a great affinity for the Great American Songbook, which accounts for about half of this album. He opens with an unusual handling of "My Old Flame" in a 5/4 setting. Later we're treated to what pianist Dave McKenna might call a "Lucky" medley, which begins with a lyrical ballad version of Bernstein's "Lucky To Be Me," then segues into the Ellington classic "I'm Just A Lucky So And So," which is delivered as a delightful romp.

My favorite moment on the album is Wofford's eight-minute version of Irving Berlin's "The Best Thing For You," which jumps out of the speakers with vitality. Throughout the album, Wofford shows a strong ability to burst loose with a creative right hand as well as playing in a reflective manner in ballad settings. These numbers are enhanced by the presence of Washington and Lewis. The drummer gets a good opportunity to excel on his own composition "Dex-Mex," a tribute to Dexter Gordon. All hands work hard to make a success of the Duke Ellington flagwaver "Take The Coltrane," which was written for the joint Ellington-Coltrane session in the early '60s.