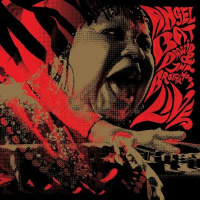 When the Chicago-based clarinetist, vocalist, composer, poet and spiritual-jazz shaman Angel Bat Dawid performed with Tha Brothahood at the London Jazz Festival in November 2019, she was riding high on the critical acclaim surrounding her recently released debut album, The Oracle (International Anthem). A cosmic lightning bolt of free jazz, mutant funk, electronica and spoken word with an impact on a par with Samuel L. Jackson's reading of Ezekiel 25:17 in Quentin Tarantino's Pulp Fiction, The Oracle confronts the ugliness of white racism in the US and, by extension, anywhere else in the world. It sounds like The Last Poets might once have sounded fueled by Sun Ra's Arkestra, the spirit of Roland Kirk, and either George Clinton 's Parliament / Funkadelic or a truckload of mescaline.

Live is a concert recording of The Oracle, made at JazzFest Berlin, where the Chicagoans' 2019 European tour began. It was not an auspicious start. The gig was preceded by a series of racist incidents Dawid and the band suffered during their short stay in Berlin, shamefully including one from JazzFest staff and another from staff at The Ellington Hotel (so named because it stands on the site of the historic Badewanne Jazz Club, which hosted Duke Ellington in the 1950s).

The upside of these incidents was that they replaced any jet lag Dawid and Tha Brothahood may have been feeling with a shot of galvanising fury. If the performances on The Oracle blaze with passion, those on Live are even more intense. Most of the material is from the earlier album, an overdubbed solo set which Dawid assembled herself and most of which she wrote. The only pieces not wholly composed by Dawid are "Destination," whose topline was written by Yusef Lateef, and "What Shall I Tell My Children Who Are Black," which has lyrics by the late Chicago poet and African American activist Margaret Burroughs.

Of the Berlin show, Dawid says, "It was very deep, and really helped me to process all the rage, and uncomfortable things I was feeling. It made me think of all the artists of the past who endured way more than I ever will with this music industry. It was a very freeing and beautiful show. We played our ass off." They certainly did.

Enlightenment; Destination; Capetown; Black Family; What Shall I Tell My Children Who Are Black; London; We Hearby Declare the African Look; We Are Starzz; VIKTORious Return; Tha Wicked Shall Not Prevail; Melo Deez From Heab'N; Dr. Wattz n' em; HELL.