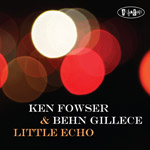 Little Echo is a delightful collection of bop-influenced tunes—contemporary, but with the authentic sound of a classic late-'50s or early-'60s ensemble. The quintet sounds like it brings many decades of experience to the recording yet the co-leaders and composers, saxophonist Ken Fowser and vibes player Behn Gillece, are still only in their late-20s. This is their second quintet album although their debut, Full View (Posi-tone Records, 2009), featured a different rhythm section.

Fowser's tenor playing is characterised by a brightness that complements Gillece's ringing vibraphone sound, giving their playing a welcoming, positive, feel. Gillece has composed most of the tunes here—Fowser contributed "Ninety Five" and "One Step at a Time"—but every track finds the pair sharing the limelight whether playing tight unison parts or trading solos. Their unison playing is splendid—exemplified on "Sap," where they play hard and fast, on the smoother groove of "Resolutions" or on "Another View" where they show a funkier edge. Each man can solo with verve as well, as can pianist Rick Germanson whose piano style can move from gutsy and swinging to more understated playing with apparent ease.

Although Fowser and Gillece get their names on the cover, this is very definitely an ensemble recording. The three remaining members of the quintet are crucial to the album's sound, underpinning the sax and vibes with some exemplary rhythm work. Drummer Quincy Davis has a light and sensitive touch: his subtle playing ensures that the tunes swing but never intrudes on the front-line players. Ugonna Okegwo's bass playing is always thoughtful and considered, a perfect match for Davis whether driving upbeat tunes like "One Step at a Time" or adding softer, more emotive, tones to "The Dog Days" or "You."

Little Echo is an assured album from a fine quintet. Fowser and Gillece are an extremely effective partnership and the band readily creates a welcoming atmosphere with stylish and confident musicianship. Marc Free's production is superb and the Posi-tone "house style" packaging adds another touch of quality to the album.

Resolutions; Ninety Five; Sap; The Dog Days; Vigilance; Little Echo; One Step at a Time; You; Another View.