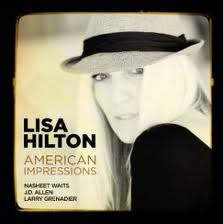 The last few years have seen the release of significant jazz recordings celebrating Americana. The majority of these have been devoted to jazz vocals and include: Jacqui Sutton's novel "Frontier Jazz" concept as manifested on her 2010 release Billie & Dolly (Toy Blue Typewriter Productions), Laurie Antonioli's rugged and rustic Midwestern soundscape on American Dream (Intrinsic Music, 2010), and Tierney Sutton's bold and uncompromising New World vista American Road (BMF, 2011). Other singers, like Carter Calvert and the Roger Cohen Trio, make a nod toward the creative American spirit, as she did with her stunning "Motherless Child"/"Washing of the Water" pairing from Carter Calvert and the Roger Cohen Trio (Self Produced, 2012).

Pianist and composer Lisa Hilton issues forth with a collection of mostly original instrumental compositions that present a song cycle without words. American Impressions is a suite presenting the distilled spirits of Gottschalk, MacDowell, Ives, Copland, Gershwin, Bernstein, Glass, Goldsmith, Williams and Newman. On this recording, Hilton's pianism is more firmly rooted in the rhythmic and harmonic metaphysics of the American classical repertoire than in jazz. More specifically, Hilton has a very potent soundtrack touch in her composing that gives her music a panoramic texture. It is the rest of her fine quartet—saxophonist JD Allen, bassist Larry Grenadier and drummer Nasheet Waits who ground the jazz in the pieces. The listenability of these pieces is as seamless as the music of George Winston with greater artistic sincerity and emotional depth.

The disc opens with a full quartet performance of the original "Too Hot" where Hilton establishes a thermal-induced langor with a simple two-chord modulation and a slightly dissonant and nervous theme. The tempo reflects the heat of the title. Allen's tenor saxophone is eerily reminiscent of John Coltrane without the harsh tone. Allen's accompaniment part sounds specifically arranged, not unlike what Gil Evans provided Coltrane on trumpeter Miles Davis' 'Round About Midnight (Columbia, 1957). It is simple, unadorned and elegant, light and ethereal. "The Anatomy of the Blues" is, as the title describes, a scaffolding to behold. It begins with Hilton filling the air with low notes propelled by Waits' insistent drumming. Allen emerges, again like Coltrane whisping out the the miasma as he did on "Acknowledgement" from A Love Supreme (Impulse!, 1965) or on "Impressions." Again, Allen does not copy Coltrane, but does summon his spirit and place in this American landscape.

Hilton mines deep and wide, refining her results as she plays. The briskly-paced "Subway" recalls Philip Glass' minimalism in a two-note left hand modulation while the right hand summons a contrasting complex of ideas. On the original "Accidental Romance" crosses a Gershwin introduction with a Randy Newman film whimsy—think the soundtrack to Ragtime (Paramount Pictures, 1981) meets Porgy and Bess (1935). The two "standards" are Joni Mitchell's "Rainy Night House," which maintains fully its folk-pop potency while gaining gravity in Hilton's low-register playing, while Duke Ellington's "Echoes of Harlem" tools along on an inventive left-hand figure that interestingly seems to take the piece out of the jazz realm and into something else altogether. Hilton's approach captures Americana while it is not looking, resulting in a satisfying product.