By BRUCE LINDSAY
September 4, 2013
Sign in to view read count 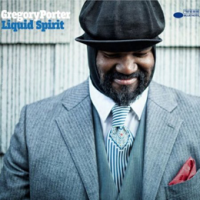 Gregory Porter has a lot to live up to. Widespread critical acclaim, Grammy nominations and reviewers suggesting that he's the next big jazz star, the man to bring jazz back to mainstream popularity, all lay a big artistic burden on his (admittedly quite broad) shoulders. Liquid Spirit is his third album and it heralds a move to a major label, Blue Note. Maybe that just raises expectations even higher. No matter—Porter meets, and even exceeds, such expectations.

Porter's voice is a joy to hear: warm, engaging, capable of conveying emotion with subtlety. He's technically impressive, but he never uses technique just to impress. He's a fine songwriter as well, combining beautiful melodies with lyrics that tell stories and express feelings that seem to come straight from the singer's heart.

For Liquid Spirit Porter has retained a quintet of musicians from his second album, Be Good (Motéma, 2012). The saxophones of Yosuke Sato and Tivon Pennicott come together to excellent effect on the hard bop-come-gospel flavored title track, the soulful "Movin'" and the cheerful "Wind Song" but the album's finest moments appear when the instrumental accompaniment is pared down to just Chip Crawford's piano, Aaron James' bass and Emanuel Harrold's drums.

The sad but beautiful "Water Under Bridges" keeps things really simple: just Porter's voice and Crawford's piano. The result is a three and a half minute triumph: bluesy, heartfelt and heartbreaking. "Hey Laura" and "Brown Grass" run it a close second, both songs enlivened by Harrold's sympathetic drumming. "Wind Song" is more upbeat, a celebration. Soul classic "The 'In' Crowd" swings, Harrold and James laying down the groove, Crawford crafting a strong solo and Porter making it clear that he's in with the "In" crowd—not boasting, just telling it like it is.

There's just one small cautionary note. "When Love Was King" and Sammy Cahn and Jules Styne's "I Fall In Love Too Easily," the album's closing tracks, clock in at almost seven and eight minutes respectively, double the length of most of the songs. Despite Porter's superb vocals, the songs tend to meander and lose focus: a rather downbeat follow on from the gorgeous "Movin.'"

Intriguingly, while Porter's debut album, Water (Motéma, 2010) gained a Grammy nomination for Best Jazz Vocal Album his nomination for "Real Good Hands" from Be Good (Motéma, 2012) was in the Best Traditional R&B Performance category. There are performances on Liquid Spirit that could readily be considered for jazz, R&B, soul or gospel awards. Porter makes the transition between genres with apparently effortless ease—he's a singer and a songwriter at the top of his game and Liquid Spirit is an inspiration.