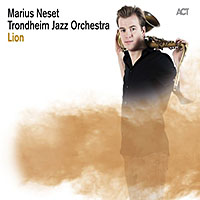 Despite having yet to make a breakthrough in North America, in the space of less than five years Marius Neset has gone from virtual unknown to one of Europe's hottest properties, gigging with his quartet all around the continent, including an incendiary showcase at the 2012 Jazzahead! trade show in Germany and an even more searing set at the 2014 Jazzkaar festival in Estonia. That this young Norwegian-born/Denmark-based saxophonist (still on the shy side of 30) has managed to achieve so much in so little time is not only evidenced by Lion, but by his carrying enough weight to take the eleven members of Norway's prestigious Trondheim Jazz Orchestra on the road for two 2014 performances, including one at London's legendary Ronnie Scott's jazz club—no mean feat, given the usually prohibitive expense involved in traveling with such a large ensemble.

But after two releases under his own name (2011's bold Golden Xplosion and 2013's Birds), along with a 2012 co-led recording with tubaist (and fellow Norwegian) Daniel Herskedal, Neck of the Woods—all for Britain's small but substantial Edition Records and all receiving almost unanimous critical acclaim—it would seem that, at least in Europe, Neset has reached the point where he can pretty much write his own cheques. If Birds was a more ambitious recording than Golden Xplosion—still revolving around a core quartet that, these days, includes Phronesis pianist Ivo Neame and drummer Anton Eger, along with relative newcomer, bassist Petter Eldh, but expanded to include, at various points, vibraphone, tuba, flute, trumpets, trombone and French horn—Lion ratchets things up another few notches with an even larger cast of characters.

An eight-song, 65-minute set of compositions that, with the exception of Golden Xplosion's title track (bold and brash on the original, even more so here) and two pieces from Birds (the episodic "Sacred Universe" and appropriately monikered title track), were written specifically for a group of players who are, in many cases, also leaders in their own right, Neset writes, in his brief liner notes, "I didn't think of them as a big band, but more as twelve strong musical personalities who I'd compose for individually." It's a philosophy clearly supported both in the saxophonist's writing...and in performances that lead to Lion being one of the year's most potent and impressive large ensemble recordings. But more than simply being about the strong individuals, it's also about interaction on a level that comes from many of these players working together regularly in the TJO, even if the exact lineup changes from project to project.

Originally commissioned by the Molde Jazz Festival in 2011, this music was first premiered at the festival the following year and, by all accounts, was a highlight of the festival. It's not hard to imagine why: beyond Neset's writing, which is remarkably mature and well-formed for someone so young, his eleven band mates—twelve on two tracks, with the addition of flautist Ingrid Neset on the two tracks from Birds—not only turn in some stellar performances of their own, but drive the saxophonist, despite being featured less than on other recordings, to some stratospheric heights that raise an already high career bar even further.

Lion also positions Neset as a composer and arranger who pays as much attention to color and near-palpable texture as he does thematic constructs and creating challenging contexts for individual and collective exploration. He takes as much advantage of individual strengths, such as the inimitable extended techniques of Streifenjunko's Eivind Lønning, as he does saxophonist Eirik Hegdal's explosive power on baritone, and regularly breaks the ensemble into smaller subsets to exploit the melodic, harmonic and rhythmic potential of the instruments available to him to their absolute fullest.

An example of how Neset utilizes permutations and combinations to create both dramaturgical development and textural breadth can be found on "In the Ring." With Hegdal's baritone, Peter Fuglsang's alto and Hanna Paulsberg's tenor combining with Neset's soprano saxophone to create a series of cascading and rhythmically propulsive lines, they're also a setup for introducing the two trumpeters and trombonist Erik Johannesen, who help create an even more complex contrapuntal stew, all driven with alacritous energy by Eldh and the increasingly ubiquitous Gard Nilssen, a drummer who—with current projects that include the nuclear post-bop swing of the Polish/Norwegian collaboration Obara International Quartet, electric guitar power trio Bushman's Revenge, lectro-acoustic duo sPacemoNkey (with In The Country hyper-pianist Morten Qvenild and '60s/'70s-informed avant-garde jazz of Cortex—is absolutely in the running for hardest working drummer on the scene today.

Blending tone poems, explosive, irregular-metered funk and dynamic drops into more delicate and elegant passages, Neset also knows how to make the TJO swing. "Sacred Universe" may largely follow the same roadmap set out for the track on Birds, but with more colors at his disposal—and many of the same, with Jovan Pavlovic and Gard Nilssen, taking the place, respectively, of Birds accordionist Bjarke Mogensen and vibraphonist Jim Hart—the tune moves through its multiple sections towards Neset's set-defining soprano solo, bolstered by an even more hard-swinging rhythm section that also includes Norwegian pianist Espen Berg. But that's only the first half of a tune that also features a lengthy solo from Lønning that may begin with his more characteristic extended techniques, but ultimately resolves into a more wonderful feature than usual, demonstrating that this more avant-regarded trumpeter is equally capable of playing inside the tradition, with a tone that moves from burnished warmth to growling lows and piercing highs as he also turns from strong group support to an a cappella section that brings the piece to its dramatic rubato conclusion.

With each successive recording, as he continues to grow in dramatic leaps and bounds, Neset has long since passed delivering on any early promises to his current state, where anything and everything seem possible. As he seems to leverage each and every lesson learned into building blocks for continued evolution and growth, Lion may be his most expansive and cinematic document to date, but it's also a consolidation of everything that's come before. Where he'll go next is anybody's guess, but one thing is certain: if the reputation he has built in such a short time in Europe can somehow be brought across the ocean to North American audiences in a way that gives him the exposure he deserves, Neset is well on his way to being as influential to his generation as others, like Chris Potter and Michael Brecker, have been to theirs.