By Geno Thackara
December 11, 2018
Sign in to view read count 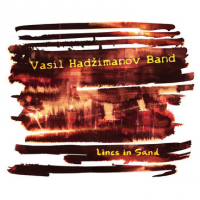 Among work with half a dozen musical ensembles and a line in TV/film scoring, one has to wonder when Vasil Hadzimanov has time to sleep, let alone lead his own group. Nonetheless he's managed seven albums with this wildly ambitious electric fusion outfit as well. If the title and cover of Lines in Sand suggest something contemplative or new-agey with a nature theme... perish the thought. This high-energy crew is too busy throwing more things into their loud multicultural melting pot to barely even pause for breath.

Hadžimanov has serious jazz chops on the keys, but if you ever see him playing in a lounge, it would have to be in a far-future outer-space lounge opening for Sun Ra. There's plenty of swooping synth to suggest the feel of escaping gravity, though it's balanced with some blazing acoustic piano, soaring electric guitar and grounded in percussion straight out of India. From the opening almost-mantric chant to the deep psychedelic reggae groove that rounds things out, the band continually blurs stylistic lines so smoothly you can barely hear the join.

They play their game of genre sardines most fervently in the early highlight "Mr. MoonJune" (a most fitting tribute to label boss Leonardo Pavkovic), packing brisk danceable soul, club piano on speed, Weather Report funk, cosmic ambience and blistering sheets-of-sound sax in one seven-minute whirlwind. The roiling high-speed "Kazi" pieces could score an action-packed spy movie set in Shanghai or Dubai; "Maklik" would give bands like Ozric Tentacles a run for their money in the psych-dub department, while "For Clara" could almost be a loose modern R&B ballad if it didn't wander into an experimental haze and subsequent wailing jazz jam instead.

With a throughline of Eastern scales and organic rhythms to mostly tether it to Earth—credit the leader's strong Balkan musical roots there—Lines in Sand is a sprawling affair too omnivorous to be confined by borders. If it gets scattered or overwhelming in spots, that's probably the point: when hanging onto a rollercoaster, a little risk of whiplash is all part of the fun.