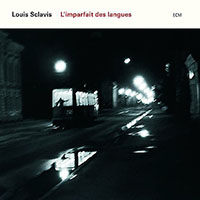 Music has long been considered a universal language, with a syntactical potential as broad as the artists who create it. While it's not always easy to articulate in non-musical terms, it's the specific way concept is translated into sound that distinguishes any artist. Clarinetist/saxophonist Louis Sclavis has yet to record two albums for ECM with the same lineup, but on L'imparfait des langues he's intentionally placed himself in unknown territory by assembling a new group with whom (drummer François Merville aside) he's had minimal, if any, prior exposure. The result is an album that expands Sclavis' language without losing the fundamentals that have always defined it.

A commission for Monaco's 2005 Festival Le Printemps des Arts, the performance was canceled at the last minute with the unexpected passing of Prince Rainier. All dressed up with nowhere to go, Sclavis took the group into the studio and recorded the album in a single day. The energy of discovery is in plain view as Sclavis' new group searches for—and finds—its own vernacular.

With the exception of Merville, nobody in Sclavis' quintet is past their early 30s. The group's collective background, while considerably distanced from conventional jazz, is an apt one for Sclavis, who is equally removed from—though by no means inconversant with—that tradition. Free improvisation, contemporary composition, rock beats, and ambient and noise soundscapes are all a part of L'imparfait des langues, but no single aspect dominates or defines.

Whether the ambience is dark or bright, the approach abstruse or straightforward, or the timbres gentle or jarring, L'imparfait des langues speaks its own language. It won't be completely foreign to those familiar with earlier Sclavis works, but with a new and even more stylistically broad-minded ensemble it's an exciting expansion of the clarinetist's distinctive musical patois.