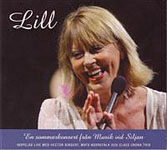 And if her impromptu monologue on "I'm Gonna Sit Right Down And Write Myself A Letter" is a bit of a letdown, she makes up for it with a genuinely funny story of how she once brushed her teeth in champagne after reading that Françoise Sagan had done likewise.