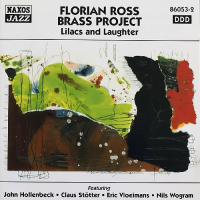 Fixtures. Florian Ross has shown up as leader on three Naxos Jazz releases. The two previous to this one are the Florian Ross Quintet Seasons and Places (86029) and Florian Ross Suite for Soprano Saxophone and String Orchestra (86037). Florian Ross’ musical conception is as broad as that of Uri Caine who has most recently been investigation the jazz elements of Gustav Mahler and Tin Pan Alley. Ross’ style can best be described as exploratory. His quintet recording is very much avant-garde and modern. His suite for soprano saxophone was probing and free. Lilacs and Laughter is his most fully realized project to date. It is an effective mixture of mainstream jazz and classical brass ensemble. Not exactly third stream, but a genre-buster to be sure.

Ross’ piano is for the most part introspective. His playing and writing are precise. His horn ensemble operates with the cohesiveness of a classical ensemble. Of note are the “Vamps” he includes. These are finely crafted musical vignettes, tone and rhythm pictures. This is interesting and intelligent music. Look out, Uri.