Sainkho Namtchylak: Like a Bird or Spirit, not a Face 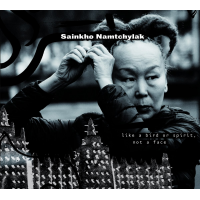 It is not easy to find a definitive discography of Sainkho Namtchylak's album releases, partly because of subtle variations in the spelling of her name and also because she has appeared on quite a few compilation albums. However, according to Namtchylak herself, this release brings the total number to over fifty. Despite the considerable ripples that the Tuvan singer has created since she first attracted attention in the early nineties—notably with albums such as Lost Rivers (FMP, 1992), Naked Spirit (Amiata, 1998) and Stepmother City (Ponderosa, 2001)—Like a Bird or Spirit, not a Face can already be judged as one of her very best.

That judgment can partly be attributed to the presence of producer Ian Brennan, who won a 2011 Grammy as producer of Tuareg band Tinariwen 's best World Music album Tassili. (V2 Coop, 2011). He has also produced several other Grammy nominees (most recently the Zomba Prison Project.) But far more vital to the success of Like a Bird or Sprit, not a Face is the fact that alongside Namtchylak is Tinariwen's rhythm section of bassist Eyadou Ag Leche and drummer Said Ag Ayad (both now members of the band Terakaft), enlisted when the singer said she would like to work with North African musicians. The common ground and chemistry between the Tuvan and the Tuaregs is remarkable and makes extraordinary listening.

All the trademarks of Namtchylak's incredible vocal style remain in place, including her vast range from a throaty demonic growl through to a falsetto worthy of Donna Summer. Never used for novelty effect, her voice is ideally suited to her songs which all tell stories. Sung in three languages—Tuvan, Russian, English—those songs have the advantage that it is not necessary to understand the literal meaning of the words to appreciate them as Namtchylak's voice makes their emotional content immediate and inescapable.

The musical accompaniment from Namtchylak's own guitar plus the Tuaregs unfailingly frames the vocals to best effect. The music is an eclectic blend of styles that skilfully blends its ingredients into a seamless fusion that occasionally references blues, desert-rock or beyond, creating an end product that is surprisingly catchy. The occasional addition of loops from Brennan subtly enhances the mood. All three musicians said this was one of their best-ever creative experiences. Whatever they are expecting, listeners are likely to find this music deeply satisfying and compelling.

Title: Like a Bird or Spirit, not a Face | Year Released: 2016 | Record Label: Ponderosa Music&art