BY JERRY D'SOUZA
December 4, 2007
Sign in to view read count 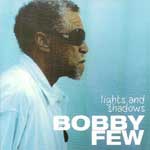 Few goes solo here with six of his own compositions and one from Lacy. The writing gives him the base to investigate the mood and then take off on his own urge. He does this with quite splendid perception, constantly finding something new to dwell on and develop. He continues to be a positive force.

Few is in full flow on "Lights and Shadows. The light comes in the full flow of notes, the dynamics impelled forward. His is a gush that washes across fertile plains to be harvested into the new. He does not sacrifice harmony; his chords can thunder and emphasize, key to the pulse he sets. Having indulged his muse for sparkle and snap, he pulls in the pulse, invests a melody, before engaging in a constant shift of tide and tempo.

Enomis, written for his wife, is soaked in a graceful melody. Few lets the melody cast its spell, playing with careful deliberation, letting the music breathe in the spaces he opens. And when he gives in to the joy of the moment, he expresses it in a softly unfurled lilt of notes.

Few's artistry is made manifest in the diversity of his approach. He gives the listener much to savor and appreciate.

Bells; Flakes; From Different Lands; Enomis; Lights and Shadows; What You Doing?; Dreams.