BY NENAD GEORGIEVSKI
May 26, 2021
Sign in to view read count 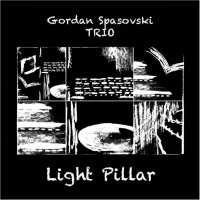 Pianist Gordan Spasovski's debut album Light Pillar moves fluidly from meditative notes to bursts of rapid-fire jabs, meticulously sculpted by the accompanying band. A ubiquitous presence in Skopje's jazz community for several years Spasoski shows up his abilities as a bandleader, and his wealth of talent, vision, and discipline on this record. He leads an excellent pool of players, all of whom he has worked with on various occasions, and the outcome reflects the true sign of their maturity as a group of seasoned jazz musicians and risk-takers. On this record, he is balancing his compositional rigor and improvisational élan with great results. Unlike many debut records, all of the material on Light Pillar is self-penned. Each of the compositions embraces specific ideas, and his technique and sound take a flight from here thanks to the connections he has developed with bassist Kiril Tufekchievski and drummer Viktor Filipovski. These works exude distinctly contemporary ideas even when working with templates informed by past masters such as pianists Bill Evans and McCoy Tyner.

The opening title track is bright, loving and tender, with affecting melodies which conjure an optimistic mood reminiscent of Bill Evans' gentle romanticism. Filipovski colors the music with brushes in subtle yet masterful ways. Spasovski's touch is just right, lovely and restrained when he needs it to be and expressive and dynamic in other moments. "Burning Sands" is where the trio begins to take off. There is a versatile, tasteful swinging by Filipovski which propels the others to dizzying heights. The music is expertly executed with elegance and taste by these three team players; the rapport they all share on this track is as unimpeachable as their individual talent. "Outside of the Time" features jazz singer and Spasovski's old musical partner, Johnny Ilija Apelgreen, reciting a poem by Macedonian poet Nikola Madžirov as the band provides the perfect setting for his unique voice. Apart from the trio tracks, two solo piano compositions, "Virgin Diamond" and "Contentment," show that Spasovski is a great ballad composer and player.

Throughout, Spasovski appears to be an exceptionally thorough worker. Regardless of the setting, trio or solo, he investigates the myriad of possibilities a melody can have but often in an expected jazz improvising framework. His articulation of harmony and rhythm is a reflection of a mainstream jazz orthodoxy, but his impeccable control of dynamics adds another dimension to the music. In the end, Spasovski's sensibility as a bandleader and writer is what informs the album, but the group's energy, riveting intensity of their musical exchanges and quick thinking across eight compositions on Light Pillar offer a plethora of wonders on this near-flawless debut.

Light Pillar; Burning Sands; Outside of the Time; Large Marbel; Virgo Diamond; The Dance of the Rifflebird; Contentment; In the Late Evening Hours.