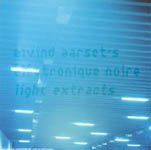 Although it is recognisably from the Jazzland ECM-with-beats mold, because of its bass-heavy rhythms and grooves, guitarist Eivind Aarset's follow-up to Electronique Noire (Jazzland, 1998) definitely sounds like a muso's album. Aarset is happy to discuss his roots in Hendrix, heavy metal, fusion and ECM—elements that combined with the Jazzland ethos to give his debut album its unique sound, and caused it to attract comparisons with electric Miles.

Here, those factors are more integrated into a seamless whole. Not totally though. Aarset cannot resist the occasional blast, and on "Self Defence" his Hendrix roots are showing, as he cooks up a distorted noise-storm of a solo. And "The String Thing" features wailing (treated) guitar in the manner of your favourite axeman. Such rockist excesses are not the norm, though. Far more common is a sustained groove with all the sounds in an electric melting pot of a mix, and individual instruments only occasionally recognisable—apart from the ever-present bass and drums.

Despite being rhythmically charged, this is not warm or engaging music. Rather, it is detached, even alienated, and alienating. One can imagine it as the soundtrack to the 2010 remake of Alphaville. Chilling but impressive.