Phronesis: Life To Everything 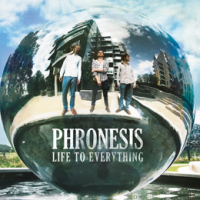 In the contemporary world of jazz, when bands form, record and split with reckless disregard for longevity, Phronesis seems to have been around forever. Danish bassist Jasper Hoiby formed the trio, which also includes British pianist Ivo Neame and Swedish drummer Anton Eger, in 2005. It approaches the end of its first decade by releasing Life To Everything— an emphatic recording from a band still filled with the enthusiasm of a group at its debut gig.

Phronesis recorded Life To Everything at the Cockpit in London, during the 2013 London Jazz Festival. It's the band's fifth album and their second to have been recorded live—the previous live album, Alive (Edition Records, 2010) featured Mark Guiliana as a temporary replacement for the unavailable Eger. The high live:studio ratio suggests that the trio is happiest on stage. The band's reputation as a live act bears this out and the energy that bursts out of Life To Everything—much of it from the dynamic and ever-creative Eger—gives the suggestion further credence.

Sound quality is exceptional—all three instruments are crisp and clear, thanks to the work of engineer Matt Robertson and assistant engineer Alex Killpatrick. The double bass is particularly well-recorded, capturing both Høiby's powerful pizzicato playing and his more subtle arco bass. There's great interplay between the three musicians—exemplified by Høiby's exciting "Wings 2 The Mind" on which each man shifts smoothly from ensemble player to backing instrumentalist to soloist and back. There's strength in depth in the songwriting department too, with Høiby, Neame and Eger contributing three tunes each.