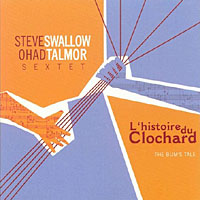 When, after first meeting him in '95, tenor saxophonist Ohad Talmor first suggested to bassist Steve Swallow an album interpreting of some of Swallow's material, stating that he "didn't propose to treat [his] material nicely," he was told to "have his way." The result, L'Histoire du Clochard (The Bum's Tale) places some of Swallow's most popular compositions, and a few more obscure ones, under a microscope, the result being something quite different than one might expect. More chamber music than chamber jazz, although there is a firm improvisational element, Talmor reveals an even greater depth to Swallow's compositions than was already plainly evident.

Choosing the same orchestration as Stravinsky's "Soldier's Tale," with the exception of no percussion and tenor saxophone substituting for bassoon, Talmor digs deep into Swallow's work, revealing aspects that the standard jazz interpretation of theme-solo-theme, as engaging as it has always been, has missed entirely. The harmonic possibilities of Swallow's pieces have always made them attractive to jazz players, but who would have thought that they could evolve into self-contained miniatures that, taken together, become a larger multi-movement suite, expanding far beyond the composer's original intent?

Talmor's arrangements often render Swallow's work nearly unrecognizable. While the familiar themes are there, they are often so buried in rich counterpoint and close harmonies, as in the case of "Chelsea Bells," that one has to look closely to find them. And while rhythmic movement, a characteristic of Swallow's approach that Talmor has chosen to for the most part to eschew, is more limited, the more lush harmonic arrangements create a whole new sonic world and alternate ambience to the original treatments. "Some Echoes," originally recorded on Swallow's duet record with Gary Burton, Hotel Hello , becomes a luscious cadenza, with Russ Johnson's trumpet treading lightly over a wash from Jacob Garchik's trombone, Meg Okura's violin and Greg Tardy's clarinet.

L'Histoire du Clochard may prove difficult for purists who were expecting a more literal tribute to one of contemporary jazz's most enduring writers and performers. Still, what Talmor has done is create a work that manages to be completely true to the spirit of Swallow's compositions while, at the same time, being somewhat irreverent and shedding a new light on mostly familiar work. He succeeds in finding a deeper beauty, a richer landscape, than Swallow's own interpretations have previously revealed. And, while loftier in its aspiration to longer form, L'Histoire du Clochard remains true to the dry wit of Swallow's writing, as well as its lyrical innocence.

Visit Ohad Talmor on the web.