By KARL ACKERMANN
October 29, 2010
Sign in to view read count 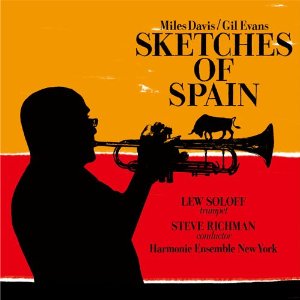 Sometimes it feels as though trumpeter Miles Davis never left the stage—his afterlife in airplay, books, t-shirts, reissues and tributes is ubiquitous. But even for those jazz fans who would rather not languish in nostalgia, Davis, like saxophonist John Coltrane, continues to set a standard against which to gauge a whole range of jazz styles, from traditional through fusion to avant-garde. Cover versions of Davis typically pale by comparison with the originals and quickly disappear, though it doesn't stop the attempts from coming.

For the occasion of the 30-year anniversary of Davis' Bitches Brew (Columbia, 1969), a number of Davis related releases have hit the street, including two from trumpeter Wadada Leo Smith and one from keyboardist, arranger and bandleader Colin Towns. It's hard to imagine that anyone could have taken on a more structurally challenging project than to update Davis' Sketches Of Spain (Columbia, 1960)—and do it well. Trumpeter Lew Soloff and conductor Steve Richman have not only stepped up to that plate, they have produced a work that breathes new life into the original.

The original Sketches Of Spain is considered a classic due to its scope, and the talents associated with the project, rather than the superiority of the material or the production. It is not the best work from either Davis or arranger Gil Evans and was not as widely popular as Davis' earlier work or his later reinventions. In some respects, the Soloff / Richman version is remarkably similar. Each of the five pieces in the new recording plays within seconds of the original track length. Richman's arrangements, while adding some additional texture and shading, are ultimately respectful of the Evans approach. However, there are notable differences between the versions as well. Richman conducts the 19-piece Harmonie Ensemble New York—a downsizing from the 27-piece Evans orchestra. The effect is that the sound is now cleaner and more focused. The jazz element is not at war with a symphony as is sometimes the case in the original, and the result is that the Soloff improvisations retain more continuity with the larger group .

The first of the two benchmark pieces in the collection is "Concierto de Aranjuez," composed in 1939 and the most well known of Joaquin Rodrigo's classical compositions. It is the central movement from this work that opens the first 16-plus minutes of the collection. The point of differentiation between the two versions is in the quality of sound, not necessarily just from an engineering perspective, but from the depth and tonality of the playing. Soloff plays muted trumpet on the piece whereas Davis's version was played on a flugelhorn with a Harmon mute. Soloff's is a more direct voice with longer, more fluid notes and a deep resonant feeling. The great bassist Francois Moutin supplies more than a placeholder of jazz structure as in the Paul Chambers original. Moutin's improvisation adds support directly to Soloff, making the jazz component of the composition that much stronger. The closing piece, the 12 minute Evans composition, "Solea," is a powerful rendition of the original. Soloff's Latin flavored solo is imposing and opens into the ensemble's slowly building roll. Moutin's rhythmic pulse unifies the piece, carrying it back and forth from the discreet to outright fanfare and setting the stage for a second strongly improvised Soloff solo.

Side-by-side comparisons tend to negate the matter of artistic choice, but they are inevitable when so many elements are shared by two versions of the same work. Suffice to say that the Soloff—Richman version of Sketches Of Spain stands on its own merits as an outstanding work in the niche of symphonic jazz. While much credit goes to Richman's vision, it is Soloff's improvisational skills that step into sacred ground and enhance the original without deconstructing it entirely. Lew Soloff has long had his place in the highest echelon of trumpeters. His experiences have included a long stint with an early formation of Blood, Sweat & Tears, a group that like the original Chicago Transit Authority, were pioneers in jazz-rock (as opposed to fusion). Soloff has also been a mainstay with the Gil Evans Orchestra during and after Evans' own presence, and a regular with the larger Carla Bley ensembles. He has here successfully brought his cross-genre experience and virtuosic talent to a project that required nothing less.