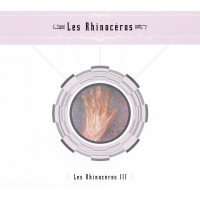 Les Rhinocéros is one of the most engaging anomalies to come out of underground legend John Zorn's forever expanding circle in a long time. The trio of Michael Coltun (basses, electronics, and anything else he can get his hands on), Amit Peled (guitars, ditto), and Jonathan Burrier (drums & percussion) has been destroying and artfully rebuilding audiences since 2010. So impressed was Zorn by their forthright mash-up of everything from math rock and noise to thrash metal and reggae that he created a "Spotlight Series" for Tzadik to accommodate their blazing niche. After diving headfirst (late to the party as I was) into the pool of their third album for the label, I caught up with mastermind Coltun to gain a little perspective about the brilliance I'd just experienced.

"The concept of the band," he disclosed, "has been to blend all these different types of genres together in an organic way. For example, I'll take a West African melody or rhythm and mix it with some harsh noise, or a Jewish melody and mix it with a grindcore rhythm section. Being able to merge the two together is something I am interested in exploring."

Such a formula will sound familiar on paper to any Zorn aficionado, but in the hands of Les Rhinocéros the results are as fresh as the backtalk of a toddler. The klezmer stylings of clarinetist Gal Klein (one of a handful of stellar guest artists to grace the program) mesh crazy-beautifully with the distorted church bells and underbrush of digital signals in opener "Takamba" before bleeding over into the aggressive staccato of "Colton's Pinky Crusher," in which the band cycles through a veritable smorgasbord of moods and styles. Cartoon samples indicate a strong influence at play—placing it somewhere between Zorn's Masada and Naked City.

And what is it like, I ask, to be welcomed into such an esteemed heritage?

"It's an honor to be a part of the Tzadik family. I grew up listening to John Zorn and the downtown New York scene. They are such a refreshing, boundary-pushing, inspiring group of musicians that it always keeps me working on new stuff. The Zorn universe is a loving, supportive place that pushes creativity in people."

On that note, one can't help but be intrigued by the seemingly random aesthetic behind track titles. "Ethi Ethi Ethi," "Kacha Kacha (Scenic 5)," and "R&E Return (Scenic 7)" are as enigmatic in sound as they are in name. Is there a method to this madness?

"I mostly never title a track as I'm writing it. After I finish a Rhino song, I'll think back to some fun times we've had, either on the road or just hanging out, and see if there are any memorable quotes or jokes that would work as a song title. Each has some sort of story behind it."

And while some, like "She Cut Her Finger in a Blender" (which starts off with a 911 call about said injury) and "Tantz" (a traditional Jewish religious song, or nigun, arranged to accommodate the musicians' own spinning blades) are forthcoming about their inspirations, others, like "Jacob (Scenic 6)" are all the more fun for their lack of apparent specificity. That said, a driving pulse beneath the latter's distortions lends a feeling of undeniable, tangible physicality. This perhaps explains the overall thematic focus on flesh, as the music inviting listeners into a decidedly anatomical self-awareness. Such fierce accounting has always pushed the band along ever-progressive avenues of expression. "When I write new music for the band," Coltun explains,

"we'll change up that material every night on tour until the songs become something different, often better than what I had initially written. Since we tour a lot, this gives us time to find synergy. When we did the second album, we had only been playing together as that lineup for two years. On this third album we've come closer to finding a band sound. Everyone was on the same page musically, allowing us to push toward a new direction that felt comfortable to everyone."

"Here's Your Meal, Mr. Field," the most epic track of the album, puts this theory into practice. Despite being nearly eight minutes, it feels the most compact of all. Like a film projector bursting into flames, it tears an enchanting hole through its imagery, reveling in the ambient backlight before ending with a kick in the teeth. A reprise of "Takamba" closes out the album, feeling more like a rebirth than a recapitulation, and leaving us starving for more. And more, Coltun assures me, is soon to come.