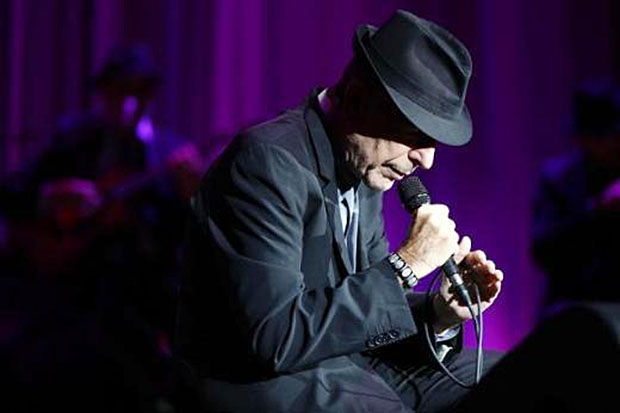 Singer Leonard Cohen does not play songs—he plays feelings. Besides being blessed with the "gift of a golden voice," he is blessed with the power to communicate with huge crowds of people. Only a handful of performers have that ability to grab people's attention with a handful of words and then hold it for hours. This can be best seen on the recently released DVD Leonard Cohen at the Isle of Wight 1970 (Columbia/Legacy, 2009) where he addressed a raucous crowd of 600,000 people with the words "Can everyone light a match so I can see where you are?," thus promptly captivating the unruly masses that night. That is actually the secret of a man whose songs, poems and novels have, for many, become precious guides into the innermost workings of their own hearts and souls. Cohen is just a different breed altogether: a graying scholar in performance, style, and substance.

Much has been said about geniuses and their peculiar nature, especially their stubborn determination to swim against the current. Someone has said that a genius is a secular version of sainthood, but in the world of Leonard Cohen, who has been a quester all of his life, the secular and the sacred always intertwined. And his songs have always been ones of experience. With creators of his stature, in creating their own worlds, they help us to make sense of this one.

Cohen's 2009 performance in Belgrade, Serbia was a momentous, emotional occasion. That triumphant tour ran for over two years and cemented him an enviable live reputation and earned him rave reviews. When it was over in 2010, with 247 concerts behind him, Cohen immediately began working on his next record, Old Ideas (Columbia, 2012). Cohen's 2008-10, tour and the new album proved that, despite the steadily increasing years, he remains a powerful and bewitching performer and author, one who still pays his rent in the "Tower of Song."

It takes a certain alchemy to make a gig special, and it's difficult to explain to those that haven't seen Cohen in concert why this icon is so such a great live performer. His concerts really are an amazing experience, a bravura display of inner confidence as Cohen roams around the stage (or kneels) while his band mates follow him, adapting to the mood of each song and moment. He has total command of the stage, defying the years to deliver sensitive, emotionally expressive versions of a catalogue of some of the greatest songs ever written.

Cohen again worked his magic, and the spell he cast was mesmerizing at the Ulker Sports Arena, a newly opened indoor arena located in the area of Ataşehir, on the Asian side of Istanbul, Turkey. It is a beautiful rounded building with a capacity of 15,000 people and, beside hosting sporting events, it was one of the stops on Leonard Cohen's current Old Ideas world tour. For both his band and the enthusiastic crowd, each song was an event. Even if he'd never had a top 20 single, no one would have noticed, from the crowd's emotional and often joyful reaction to this man's songs. It is not an everyday sight to see the 78 years old Leonard Cohen skipping onstage with impish pleasure, and kneeling to sing "Dance Me till The End of Love." It's this humility, tremendous energy and humor that kept people hypnotized and mesmerized. Witnessing souls laid bare by the performers ensured a sumptuous match between performer and location, both immersed in hushed reverence.

The songs that Cohen performed came from all corners of his illustrious career, ranging from classics such as "Everybody Knows," "The Future" and "Bird on A Wire" to "Hallelujah," "I'm Your Man," "Heart With No Companion" and "Suzanne." The new songs also fared well in the company of these classics, with "Darkness," "Amen" and "Going Home," from Old Ideas all well-received. Picking highlights among the show's dozens of signature moments is no easy feat, but "Night Comes On," which expanded on the melody of "Suzanne," that made the biggest impression.

A man is as good as the company he keeps and the people with whom he works, and this touring band was a constant source of wonderment. The band sidestepped expectation at every turn while displaying a chemistry that was as unique as the leader himself. No wonder Cohen often stood mesmerized when someone from the band shone brightly on his instrument. "Who by Fire" and "I'm Your Man " received rousing receptions, the audience leaping to its feet in response to stirring performances that brought the songs to a rousing conclusion through the innate connection between the band members themselves.

As the twin encores—magnificent renditions of "So Long Marianne," "First We Take Manhattan," "Famous Blue Raincoat" and "Closing Time"— brought the night to an end, there was a real sense that Cohen had reconnected with his fan base and audience with a thoughtful, well-measured and exhilarating live show. Somehow, between the magic of his fantastic songs, his superb band, the mysterious charisma of the man himself and the will of the crowd to enjoy the moment, something strange and spectacular happened: a thrilling performance that nobody, perhaps not even the man at its centre, could really explain. When Cohen sings with total conviction, age is irrelevant. Class is permanent. Every show feels unique. The Ulker Sports Arena witnessed one of the best.