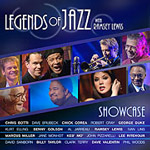 Jazz is virtually nonexistent on network television. Pianist and broadcaster Ramsey Lewis has addressed this vacuum with the PBS program Legends of Jazz with Ramsey Lewis. This Showcase CD/DVD set serves as a sampler of performances from the series. The end result is a patchwork of genres.

Popular trumpeter Chris Botti evokes Chet Baker on "My Funny Valentine, but his own voice struggles to come through. A showcase for electric bass giant Marcus Miller, joined by George Duke and Lee Ritenour on Miller's "The Panther, seems out of place.

The most interesting aspect of the series is the way it brings together musicians not usually paired on the same instrument or genre. Al Jarreau and Kurt Elling's version of Dave Brubeck's "Take Five is exhilarating, yet the coupling of Brubeck and Billy Taylor on the Ellington theme song "Take the 'A' Train is lackluster. Gershwin's "They Can't Take That Away From Me brings together sensual vocalist Jane Monheit and guitarist/singer John Pizzarelli, whose scatting guitar solo sounds like George Benson-lite.

The highlights of this high production value set are altoists Phil Woods and David Sanborn. On Horace Silver's "Señor Blues, Sanborn's piercing style is a fine contrast to Woods' flowing virtuosity, infused with blues and bebop, but Woods comes out on top.