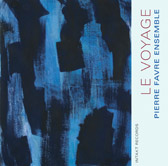 Pierre Favre is a scion of the improvisation scene in Europe and beyond. There's always been a reflective element in his drum and percussion work that suggests a slightly conservative disposition which has been manifested in a kind of politeness and reticence. Those two qualities in many respects sum up the music on this disc. While the antithesis of those qualities does not necessarily make for compelling music, in this case of this recording the overall mood is slightly soporific, as if the music could at any time simply merge with the background, never to catch the ear again.

If "Akimbo" is considered as a kind of paean to Jimmy Giuffre, it actually yields only some subtle but telling trombone from Samuel Blaser over a bed of reeds and occasionally agitated guitar from Philipp Schaufelberger, the latter of which at least has the effect of causing some ripples on the music's surface.

"As Far As That Goes" is modelled vaguely after Gil Evans in its colors, but the studiedly disjointed feel of the music lacks that master's knack for linear appreciation. Again Schaufelberger's guitar is animated and at odds with what's going on around him. The resulting tension, conjured out of the constructive use of silence as much as anything else, is unassumingly compelling before resolving via a notable absence of tension. The release, such as it is, yields little that catches the ear, and over the course of the ten minute piece, things are by turns polite and mildly diverting.

When music relies as much on understatement as this music does, there's can be something inherently risky in the strategy, but there' something different afoot on "Vreneli ab em Guggisberg" where the slow build of tension—aided in no small part by Schaufelberger's guitar yet again—is both logical and uncontrived. That said, the saxophones are only deployed to add color, and for all of the promised fireworks to come, the whole thing breaks down to that inscrutable thing that Favre and his ensemble have such an aptitude for and seem to regard as a kind of default position.

What might be summarized as the absence of fireworks is not necessarily a bad thing, in this case it makes for music which in the absence of overt physicality proffers little in the way of compensatory gestures. In its reticence it easily succeeds in being overly polite.