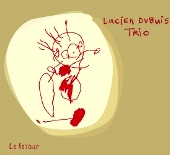 Lucien Dubuis can blow it. Roman Nowka can pick it. Lionel Friedli can kick it. Le Retour, dig it. Difficult to describe but drawing inspiration from punk, funk, no wave and jazz, it is as if Parliament Funkadelic grew up downtown stripped of all their horns but one—but what a cool horn it is.

Dubuis amazes with the deep growls and shrill over-blows he delivers from his alto sax but particularly from his bass and contra-bass clarinets. He can jam with the rhythm section, tongue-slap his reeds to play bass when bassist Roman Nowka switches to guitar or posture out front with an attitude and faux feedback that remind of a rock guitarist ï la Jimi Hendrix.

All three of these musicians can flat out play and together they make you remember the days when both jazz and rock were cutting edge and each had their own unique sound. There is much to like here. Most of the tunes, although there are a couple of slower bluesy things, benefit from a clipped attack that cleverly utilizes the unique sounds that Dubuis coaxes from his alto sax, bass clarinet and wonderfully guttural contra-bass clarinet. Nowka's bass drives the band forward in a manner akin to the funkiest electric bassists but can switch to guitar, augmenting and/or slowing things down. This is especially true on the short "shitty interludes" where he conjures up the required atmosphere to abuse pop, funk, rock'n'roll and even the concept of interludes themselves. Friedli is rock solid, lending a clearly defined rhythmic burst to the short punky songs that make their statement and get off the stage quickly.

With Le Retour, this power jazz trio has released what is so far the freshest sounding CD of the year.