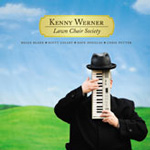 Kenny Werner is best-known as an acoustic pianist, but he's no stranger to other keyboards. Still, Lawn Chair Society's greater emphasis on electronics will no doubt come as a surprise to those who know him through solo piano outings like Live at Maybeck Recital Hall (Concord, 1994) or the more recent post-bop of Democracy: Live at the Blue Note (Half Note, 2006). With its combination of strong group interplay, electronica textures and occasional post-Miles musings, Lawn Chair Society simply confirms that Werner is an artist for whom the words convention and predictability have no meaning.

Which really shouldn't come as a surprise, given that Werner literally wrote the book (Effortless Mastery) on channelling one's technical knowledge into a consistently fresh approach.

Lawn Chair Society reconvenes Democracy's rhythm section—bassist Scott Colley and drummer Brian Blade. By enlisting trumpeter Dave Douglas and saxophonist Chris Potter—two artists who have on their own recordings been exploring paths of technology integrated with improvised music—Werner has built a quintet quite literally capable of anything. And it's a good thing, because Lawn Chair Society attempts to cover a lot of stylistic and textural ground.

Electronic sounds bubble underneath and, occasionally, come to the surface on tracks like "Lo's Garden," whose theme could easily be transposed into a straight-ahead context if it weren't for Colley's staggered support and Werner's fluidly abstract lines. The post-Herbie Hancock funk of "New Amsterdam" is equally elastic, with Blade's busy groove propelling it forward even as, midway through, the time suddenly shifts into a visceral swing.

"Lawn Chair (and Other Foreign Policy)," later in the disc, seems like a return to the same funk, with Douglas' introductory solo leading into the kind of sing-song melody so characteristic of Miles Davis' later years (think "Jean-Pierre"). But it's Werner's harmonic shuffling underneath that demonstrates the potential of even the simplest of lines to yield worthwhile results. From visceral groove to the spacious abstraction of Werner's solo and, ultimately, to harmonized textures referencing "It's About That Time" from Miles' classic In a Silent Way (Columbia, 1969), it's a brilliant piece of musical history-telling that, with producer Lenny Picket's ambient ideas weaving in and out, remains thoroughly modern.

The playing is as interactive and inventive as one would expect from a group this strong. What makes Lawn Chair Society more than just another all-star session is the conceptual aesthetic that links seemingly disparate tunes, as the connection between the melancholy closer, "Kothbiro," with the processed sounds surrounding Douglas' free-ranging solo on the aptly titled "burble_burble_splerk." Werner's unexpected shift may rankle some purists, but it's a demonstration that the best artists refuse to be pigeonholed by expectations arising from past successes, which instead become little more than steps in a constantly evolving creative process of discovery and innovation.