Maximize your visibility at All About Jazz by upgrading your musician page from standard to premium. With it, you'll receive All About Jazz home page exposure, a highly stylized / ad-free musician page with bonus features and benefits, an ad, plus you control where you sell your music and so much more.
Learn More
211 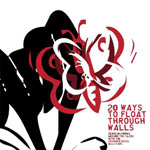 You don't have to go to Borneo's Rainforest Festival to catch Congolese thumb-piano musicians, riotous Balkan brass bands, Iranian divas, psychotic big-band jazz or chic bossa nova; Crammed Discs has it all, and more, on 20 Ways to Float Through Walls.

Throughout its quarter century existence Crammed Discs has produced an eclectic body of work which covers a fair old slice of the musical rainbow. This twenty-track compilation, compiled and sequenced by label founder Mark Hollander, showcases the label's output in the last five years.

There is a healthy dose of Brazilian music on 20 Ways to Float Through Walls, from the velveteen bossa of Celso Fonseca to bossa for the 21st Century of Apollo Nove, who employs dreamy, atmospheric electronica over conventional sounds on "Traz U Alivio, with vocalist Tita Lima vying with Bebel Gilberto ("Ceu Distante ) for the title of most sensual voice. DJ Dolores mixes dub, lazy brass, loops and electronica on the club-friendly "De dar do, and European/Brazilian band Zuco 103 get the feet moving whilst defying genres with the delightful Afro-Cuban/Brazilian potpourri of "Duele Le Le.

From the Balkans, the thumping rhythms, hot brass and swirling, heady solos of old favorites like Romania's Taraf de Haidouks and Kocani Orkestar from Macedonia stand alongside new pretenders Mahala Rai Banda. This music is a celebration of life and is garaunteed to liven up any party.

Big bands come in the form of the Kasai Allstars from Kinshasa, whose traditional trance music and myriad rhythms contrast with the loony musicianship and multiple musical personalities of Belgian group Flat Earth Society.

New York-based Iranian diva Sussan Deyhim teams up with Bill Laswell, Zakir Hussain and Hamid Drake to re-record "The Candle and the Moth, and her haunting vocal is a powerful appetizer for her album, Shy Angels (Crammed Discs, 2002). More vocal delights are provided by Tartit, a nine-piece band from Timbuktu, and by the UK's Wise In Time whose cool tones on "Nine sound like a cross between Underworld and JJ Cale.

From the Congo to Brazil, from Paris to New York and from the villages of Romania to the Sahara desert, the world for Crammed Discs is a global village. Electronic soundscapes, stripped-down acoustics, roaring large ensembles, meditative, devotional music, myriad rhythms, the ancient and the new—in the world of Crammed Discs the walls of musical prejudice cease to exist.