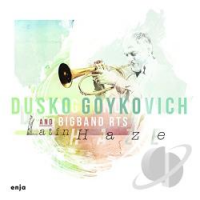 Reaching back deep into the memory bag, big band jazz aficionados might remember a brilliant, young Yugoslavian jazz trumpeter who graced the horn sections of Maynard Ferguson's, Woody Herman's and Clark Terry's 1960s ensembles. Shortly thereafter, Dusko Goykovich returned to Europe and, over the decades, has become one of the continent's most celebrated and beloved jazz artists.

A superior Post-Bop performer with strong shadings of Kenny Dorham Don Fagerquist and, when muted, Miles Davis, Goykovich's Latin Haze demonstrates that home cooking certainly helps a jazzer serve it up. Recording with Belgrade's fine Big Band RTS, Dusko goes Latin across the board, offering 10 originals which he also arranged in a classic big band style.

The bossa nova/samba groove allows the improviser significant leeway in that the tempos are approachable and the rhythmic and harmonic bases are complex enough to encourage solid improv creativity. Goykovich takes supreme advantage of those elements as he winds his way fronting and soloing over this terrific big band. His playing is crisp, creative and easily within grasp with plenty of blue swirl. No technical showoff, Dusko makes the most of each opportunity to stretch out, spinning tasty lines from concise idea nuggets. The big band behind him swings, driven by a fine rhythm/percussion section and soaring brass ("Latin Haze," "Quo Vadis Samba," "Inga"). On the recording's ballads, Dusko's nostalgic, contemplative, Harmon-muted trumpet is beautifully vibratoless on the "Good Old Days" and "Five O'Clock in the Morning" and lusciously open-horned on the pensive "In the Sign of Libra."

There's an uplifting, glass-completely-full spirit about Goykovich's writing (and playing) style and it shows in the band's acknowledgement, grabbing and running with it on "Danca Comigo" and "Samba Tzigane" and elsewhere. While the spotlight is primarily on him, the other soloists in the RTS unit shine when featured.

Overall, Latin Haze is a fine effort that is elegantly entertaining. And that is assuredly crystal clear.