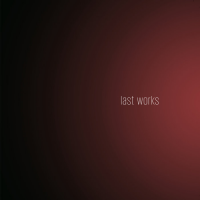 Classically trained Tom Pierson started out as a piano playing teenage prodigy in the early 1960s. His early orchestral background stood him in remarkably good stead since the compositions and arrangements for this masterpiece, Last Works are steeped in sonic complexity. It is also characterised by Pierson's self-stated desire not to regurgitate the past but to invent new and fresh forms. This mammoth double CD undertaking, which weighs-in at just over two hours in length, is divided into two "sets" roughly an hour each, one set per disc. "Sets" implies a live recording but in actuality it was recorded at Systems Two studio in Brooklyn, NY, and this is despite the first set concluding with an "encore," the comparatively short, wistful "Among Strangers."

"Abandoned" opens the first CD with a doom-laden bass undercurrent that recalls the familiar motif of the song "Fever" made famous by Peggy Lee. The tension gradually builds throughout the tune's fifteen minutes duration until the horn-rich ensemble explodes with fury. The mood changes instantly with "Chandra Lowery's Samba" reminiscent in feel to some of the Latin influenced numbers performed by the Clark Boland Big Band. However, towards its conclusion it is vested with an additional deconstruction of the regular rhythm. "By The Martyr's Decree" is rich in tonal colour, the trombones deeply anchoring the initial statements. The somewhat dour atmosphere of the piece is vanquished by the livelier "Times Remembered." Sandwiched by a Latin-esque tinge, "Winter's End" offers a more strident middle section frequently interspersed by the pugnacious horns. "Dark Story" is a dirge but boasts a powerfully haunting melody. Opening with bass guitar and drums, "The Pharoah's Serpent" marries a staccato beat with florid ensemble lines, evoking shades of George Russell.

The second set kicks off with the exuberant "Elipsis" and a gradually ascending ensemble crescendo, a slower breakdown and a resumption of the earlier exuberance. The aptly named "Sultry" rather sinisterly simmers and smokes throughout its seven minutes duration before ceding to the longest track on the album, the cryptically titled "45/8." Special mention should go here to bassist Kanoa Mendenhall, who provides a staggering tour de force of an underlying bass line. "In God's Name" features a delightful and all-too-short piano solo from Pierson. "Two Becoming 3," the penultimate track, is another long-ish piece at nearly fifteen minutes and is multi-faceted in its content and structure, finally resolving in an explosion of horns and drums.

The title of this truly excellent big band album is odd, but takes its name from the fact that these are, according to Pierson, the last compositions for jazz orchestra he will record. But there's an extra poignancy enveloped in it since this was sadly also the last recording undertaken by renowned trumpeter Lew Soloff who passed away on March 8, 2015, (aged just 71) barely two months after the studio sessions concluded. Fittingly, the CD is dedicated to Soloff's memory.