BY DAN BILAWSKY
September 18, 2012
Sign in to view read count 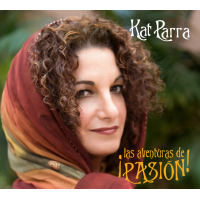 Kat Parra's voice may be the ultimate manifestation of the entire Latin music diaspora. While countless singers dabble in bossa nova or wander far and wide atop Afro-Cuban grooves, few people tackle the scope of music that Parra takes on. Engaging the totality of the entire Latin spectrum is no easy feat, but she seems willing and able to make it a reality.

Salsa sounds, Middle Eastern music, Sephardic traditions, Afro-Peruvian passion, Puerto Rican grooves, chamber ideals, classical influences, jazz standards and countless other styles merge into one cohesive whole when Parra opens her mouth and unleashes her confident voice. The graphic designer-turned-singer has been turning heads since releasing her debut—Birds In Flight (Patois Records, 2007)—and she continues to develop, expand on and refine her omni-Latin sound.

Las Aventuras de Pasion!, Parra's fourth album to date, features a large and talented cast of characters that assist Parra on her world travels. Riffing horns, rumbling percussion and mannered strings are all utilized at different times, in a successful effort to paint different pictures behind Parra's pipes. As many as a dozen musicians appear at once, as on the Puerto Rico-meets-New Orleans "Iko Iko" which gets the ball rolling, but Parra also knows how to scale things back and bring intimacy into her music; her album-ending performance of "Man On A Wire/Gymnopedie No.1," with pianist Murray Low as her only company, is the evidence.

Parra fills the space between these tracks with nine other numbers that show off her skills as composer, interpreter and world music conceptualist. Her tender and beautiful "Call Your Name" conjures feelings of longing, sadness and happiness all at once, "Morenika" takes on a mournful tone, thanks in part to Masaru Koga's soprano saxophone work and "Oye Papi," which features a short but winning trombone solo from arranger/producer Wayne Wallace, sizzles.

Las Aventuras De Pasion! isn't a radical departure from Parra's previous albums; it simply confirms that she's one of the most well-informed, astute and creative vocalists operating in the Latin jazz orbit today.