Larry Birnbaum: Before Elvis - The Prehistory of Rock 'n' Roll 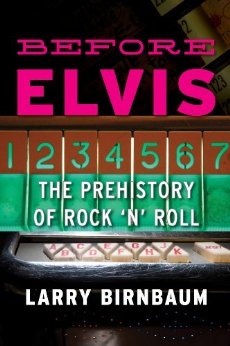 Before Elvis: The Prehistory of Rock 'n' Roll

That statement might have satisfied a generation of listeners who barely scratched beneath the surface of the genre, looking for its source. And it may have been propagated by a generation of wide-eyed romantics the same way the myth of Robert Johnson was. But it, in no way, satisfied writer Larry Birnbaum, who has penned the definitive history of American music leading up to rock. Believe this: Birnbaum is the music geek Wotan. He has listened to every recording since Edison cylinders were popular.

Rather than being shaped from solely the blues, Birnbaum makes the convincing argument that this is too narrow a view and that the whole of the American music vernacular: jazz, blues, country, vaudeville, hokum, rhythm & blues and every other form percolating up to the early 1950s is responsible for what has become the most enduring musical form to date. Birnbaum does this with stultifying detail alternating with almost poetic ruminations that begin in the late 19th century (and often well before) extending to what is relevant today. He details the histories of the progenitors, laying out the map of how each flows into the delta that is rock 'n' roll

Forget the old argument of what was the first rock 'n' roll record. Birnbaum reasons, like any decent historian, that it is beside the point. The music was an evolution. What Birnbaum does, appropriately, is point out the major harmonic and rhythmic themes in songs that eventually coalesced into what we understand as rock 'n' roll. Having said that, Birnbaum mentions two songs in particular when speaking Ur-rock 'n' roll: Cow Cow Davenport's proto-boogie-woogie 1928 Vocalion/Brunswick "Cow-Cow Blues" and the jump blues "Train Kept A Rollin'" first recorded by Tiny Bradshaw for King Records in 1951 and then by rockabilly antecedent Johnny Burnette for Coral Records in 1956. The history of the song after that is well known.

Birnbaum sites the boogie-woogie piano beat, particularly the walking bass of the left hand, the 12-bar blues, and the chugging momentum of the electric guitar, specifically that of Chuck Berry, as being the basic elements of what would become rock. But this is just the most simplified foundation. Expertly, the author weaves together an account from numberless sources, explained in laymans' terms that goes a long way in sparking an interest in these earlier styles that makes YouTube most valuable in discovering the charms of the musics that brought us to where we are today.

In his epilogue, Birnbaum sums up his lengthy treatise with some of the finest rock writing penned to date:

"Paralleling the development of jazz, rock music has grown so distant from its original sound that modern rock hardly seems to belong to the same genre as vintage rock 'n' roll. Only the backbeat and amplified guitar-bass-and-drums instrumentation have endured, and even those elements are not always present. Today's rock musicians and fans may have little or no familiarity with old-school rock 'n' roll—regrettably, since reconnecting with the music's roots might help restore its vigor. Moreover, the recognition that rock 'n' roll and rhythm -and-blues grew mainly out of jazz and hokum rather than blues, country, pop, or gospel puts a new perspective on musical history. If rock drew its most characteristic song structure from hokum, that subgenre can no longer be regarded as a mere footnote. And if rhythm- and-blues derives primarily from jazz, then swing should be reevaluated as the root form of rock and not just bebop.

"Swing gave rise to both modern jazz and rhythm-and-blues, and rhythm- and-blues, largely through its appropriation of white country and pop artists, gave birth to rock 'n' roll. Neither rural nor urban blues—aside from the blues inherent in jazz, which passed into rhythm-and-blues—had much to do with rock music until the 1960s; swing and R&B had more influence on rural and urban blues than rural and urban blues had on swing or R&B [a position supported by Elijah Wald in his Escaping the Delta: Robert Johnson and the Invention of the Blues (Amistad Press, 2004)]. Hokum made its way into R&B and rock 'n' roll through blues, swing, and country music, providing the archetypal structure for some, though by no means all, of the most emblematic rock songs...."

The author goes on to conclude things with:

"Rock 'n' Roll is quintessentially American music, drawing on a wider variety of sources than has previously been acknowledged—not only the blues, country, and pop, but jazz, hokum, boogie-woogie, mambo, calypso, and more....rock possesses an intrinsic richness born of its diverse formative elements. The rediscovery of these constituents may enhance how rock 'n' roll is perceived and perhaps how it will evolve in years to come."

...and that, gentle reader, is some fine music writing.