Brian Auger: Language of the Heart

By Doug Collette
April 9, 2012
Sign in to view read count 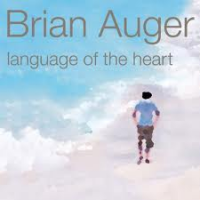 All the devout Brian Auger fan needs to know about Language of the Heart is that it overflows with the immediately recognizable tones of the British fusion pioneer's Hammond-B3 organ and Fender Rhodes electric piano. All the uninitiated needs to know is that this album favorably compares with the work Auger produced during the heyday of jazz- rock fusion.

The seven tracks, written and arranged by Brian Auger and Tea—a duo composed of keyboardist/percussionist Phil Bunch and guitarist Franck Balloffet—are wisely dominated by instrumental sounds like that of "Ella," which brings the disc to a hypnotic close. The organ is Auger's main axe, but on an ode to his current place of residence, "Venice Street Fair," he displays the sharp percussive attack that, transposed from the Fender Rhodes piano he often uses, distinguishes his work on the Hammond. His unusual approach renders his style as personal now as it sounded in the mid-to-late '70s with the various lineups of his band, The Oblivion Express.

All of this, however, is apart from Auger's vocals. His voice isn't particularly distinctive in itself but, as on the title song, his singing of otherwise greeting-card-quality words sounds like the inner dialogue of a mind turned off and relaxed floating downstream. Still, the intense percussive rhythm and virtually unabated flow of the keyboards, guitars, and bass frame the voice, not vice versa, so that, integrated at just the proper level within this otherwise lush mix, each component of the arrangement has the proper prominence.

For that reason alone, Language of the Heart posits Brian Auger as one of those rare musicians for whom his personal niche anchors him in a particular time without rendering his current output dated in any way. Not so much on "Flying Free," though: as befits its title, this cut's overly-breathy vocals, supplied by daughter Savannah Auger who otherwise acquits herself admirably, carry diaphanous sentiments that correlate with the thin synthesizer textures. The surging sound of Auger's Hammond along with the tasteful restraint of guitarist Julian Coryell (yes, offspring of Larry Coryell), however, rescues what is otherwise the stark exception to the rule of imagination on this album.

As if sequenced to compensate for that momentary lapse, the soft currents of the organ speckled with piano immediately follow on "Hymn to the Morning." This cut further reaffirms Language of the Heart as the work of a man flush with inspiration, not to mention the resources at hand, including guitarist Jeff "Skunk" Baxter and Auger's son, percussionist Karma. who help to render that inspiration vividly real.