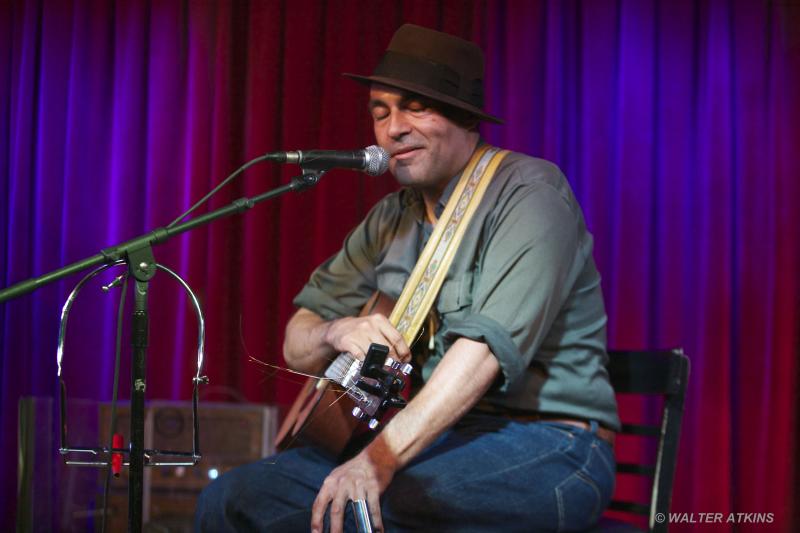 “I thought it was a great mix of blues, rock and country. It was amazing!”
&#151Bev, San Diego music lover

For some reason, Canales' drummer did not show up for the gig and presumably was still in Amsterdam. The energetic singer/ songwriter suggested maybe he, "broke the drummer or something," and that's why he decided to stay in Europe. He wasn't sure. The Native American Mexican guitarist told his personal stories of growing up in the fruit basket of the Golden State and how his music was shaped by his experiences. At one point, he decided that he did not want to raise horses and harvest produce. During the time he was doing this intensive work, he was kicked in the head by a horse, and also broke both arms.

A few times when Canales mentioned Fresno, some folks would roar their approval. He performed songs from his album The Blessing and the Curse (Music Road Records, 2015). He also touched on his very first trip to San Francisco some time earlier. He described seeing a 6-foot tall man with a blond mullet wig just before seeing "50 naked grown men riding by on bicycles." It was not a pretty picture according to him.

His "Hich-Wyah Man" was about, "someone not necessarily the devil," and was performed in an Italian church built in the 1400s. Canales smiled when talking about the irony of singing the song in the religious spot. He accompanied himself with a kazoo mounted around his neck. Later in the evening he also played some mean bottleneck blues. The set list included: "Old Red,"" Hoodoo Man," "Cold Dark Hole," "Fruit Basket," "Death Got No Mercy" and "Beat Up Blues." Most of his songs were about death and spiritual redemption, which he easily acknowledged, was, "a little morbid."

His father talked about Richie Valens and his mother was a "Holy Roller" born in Orosi, CA. She took him to a combination religious bookstore and music shop in nearby Downey. The Bible book side drew his mother, and the music side was like a magnet for him. He saw a guitar and knew, "I had to play that."

Canales said his, "second album was a life changer" when he started performing on an international level. He thanked Jimmy Lafave, his late producer and friend, for helping to bring his music to a wider audience. It was clear he still felt the recent loss, but he also had to continue moving forward. The track "Digging" (Elixir, Blackoak Records, 2012) was about a man hearing a screaming preacher but finds no comfort. "The Farmer" was a tribute to hardworking farmers in the California Central Valley and the struggle to save the dwindling farm lands.

"Deportee" was originally a poem written by Woody Guthrie in 1948. It focused on the fatal plane crash of 32 farm workers in Los Gatos. The newspapers of the day referred to the unnamed workers as deportees and they were buried in a mass, unmarked grave in Fresno. Canales helped raise funds to commemorate the event. During a historic moment in early September 2013, the new monument, complete with the workers' names, was dedicated. The ceremony was attended by hundreds of supporters from all over the United States.

"Pearl Handled Gun," "California or Bust" and "Train Station," were also performed. Unfortunately, Canales ran out of time to complete his extensive play list. The sound man quietly moved front and center among the fans. This was his way of saying time to close the first show. Three more songs were added to the second set: "Special Made," "Gooneybird" and "Night Tribe."

After the exciting date, some nearby listeners from San Diego shared their opinions on Canales' riveting presentation. Cyndi said, "I enjoyed it." Bev added, "I thought it was a great mix of blues, rock and country. It was amazing!"

Canales said the iconic blues artist Son House influenced him. The delta blues giant's music helped him to bridge the gap between his mother's gospel and the blues. Lance Canales & The Flood performed personal, genuine California roots music to an enthusiastic Biscuits & Blues audience on this Memorial Day weekend.