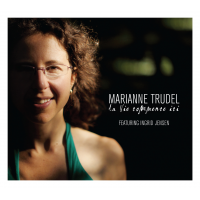 Pianist and composer Marianne Trudel may not be so well known outside her native Canada, but her elegantly crafted sound, as all good music does, carries its own passport and travels where it will. La vie commence ici is Trudel's sixth album as leader and immerses her within the sympathetic vibrations of trumpeter Ingrid Jensen, saxophonist Jonathan Steward, bassist Morgan Moore, and drummer Robbie Kuster. Trudel and Jensen share the deepest rapport of this particular session, and so it is only appropriate that the soulful introversions of their duet "Question" should open it. In their nexus germinate the seeds for all that follows, sprouted by the springtime magic of their freely improvised return, "In the centre."

Obvious from the start is Trudel's exacting sense of arrangement, which even in contexts of the full quintet allows space for discerning listeners to bask in the atmospheric truths of tracks like "Urge" and "Night heron." With an evocativeness that preaches but never proselytizes, she and her musicians unpack sparse motifs for all they're worth until there's nothing left to hide. And if the frothy textures of "Deux soleils" seem mysterious, it's only because are imposing too many words on a song that doesn't need them. Trudel commands as a singer would, carving her solo in to the overlapping surface of her rhythm section. Steward's gilding of the page emphasizes the affirmative nature of her melodic lines with freely given respect.

"Soon" is the outlying groove within this largely soft-pedaled story. Jensen is in the spotlight here, taking a long and chromatic path through the changes with graceful fortitude. Moore's bassing blends into its own reflection, through which he pans the sediment of memory until nuggets of familiar imagery appear. Trudel's own solo is epic in scope, if intimate in ways, and signals the crowning achievement of this project's reach. The title track is likewise indicative of the band's expansive capabilities. Dampened piano strings and steel drums create a haunting mood that is distinct from the rest. It reveals patience in both the writing and the performing, letting motifs develop in an organic way, so that the listener may build personal connections without compromising architectural integrity.

And while the album's longer stretches of cloud vapor (cf. "À l'abri" and "La vent est une chance") speak only of friendship and love, there is a shade of melancholy beneath it all, if only to remind us that the heart is a pilot light best kept sheltered from the wind.