BY KARL ACKERMANN
October 10, 2018
Sign in to view read count 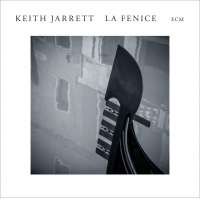 The archival gap tightens between the earlier solo release of Keith Jarrett's mid-90s concert, as captured on A Multitude of Angels (ECM, 2016), and his post-illness return to live performing. La Fenice was recorded at the Gran Teatro La Fenice in Venice, in 2006, four years after Jarrett had returned to solo performing in Japan. The double album closely corresponds with Jarrett's Golden Lion for Lifetime Achievement award from the International Festival of Contemporary Music of the Biennale di Venezia.

The opening seventeen-minute improvisation finds Jarrett in the perpetual throes of invention. "Part I" is technically impressive even if emotionally chilly. Hints of classicism permeate the busy early going, but beyond the first ten minutes the pace slows to a near minimal series of melodic fragments. The impenetrability of the piece is occasionally overpowering. In opposition, the catchy themes of "Part III" and "Part IV" recall the mesmerizing motiffs of The Köln Concert (ECM, 1975). The second disc opens with "Part VI," a repetitive piece that never seems to generate forward momentum throughout its thirteen-plus minutes. Here, it becomes increasingly evident that Jarrett is playing to an audience of one, dispensing one dialect for another with no ostensible consequence. The second disc concludes with Jarrett staples "My Wild Irish Rose," "Stella By Starlight" and "Blossom," each treated with his distinctively individual style of lyrical eloquence.

As the greatest pianist of our time, the bar is inconsiderately high for Jarrett's work. One of a kind, he can't rationally be compared to his contemporaries, so with each addition to the catalog his output is judged relative to his own history. In that vein La Fenice falls short of later ECM albums such as The Carnegie Hall Concert (2005), Rio (2011), or A Multitude of Angels. The spontaneous improvisations are interesting but a bit sterile; the ballads are beautifully played as always, but predictable. At the end of the day, La Fenice is neither essential Jarrett nor an unworthy addition to his resume. It simply lacks the impact of much of his solo work.