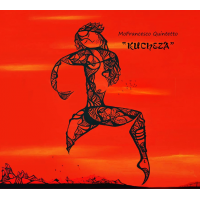 Jazz has certainly come a long way since its early beginnings, whose free spirit and richness of form means that one could easily spend a whole lifetime marvelling at its infinite variety. And none more so than on Kucheza, the MoFrancesco Quintetto's sublime and engaging new album. Based in Lisbon, Portugal, European jazz doesn't get any better than this. Combining both traditional elements of the art form, along with more continental contours, Kucheza makes for one sophisticated and enjoyable journey.

We begin with the entrancing title track, a composition reminiscent of "Eternal Caravan of Reincarnation," from Santana's Caravanserai, after which the MoFrancesco Quintetto quickly get down to business on "MoGnawa," a superb composition where one can hear the muted influence of Miles Davis as well as early Seventies jazz-fusion. Francesco Valente's hypnotic bass-lines are complemented by an array of saxophone, clarinet and trumpet, adding nuance and texture throughout. The breezy "Aljezur" is pure class, as is "Spartacus," another high-energy number during which all musicians are in perfect telepathy with one another.

"Afro" may not break any new ground, yet is an exciting listen all the same. The exotic "Ali Baba" takes the listener to North Africa, before returning to more familiar jazz territory with "Sesimbra" and "Peperoncino," superimposing a diversity of rhythms around the intricate beat of Valente's subtle anchor. On "Taqsim" the MoFrancesco Quintetto show their depth and range, actually getting inside their respective instruments, and giving the tune a harmonic subtlety in the process.

The melodic variations continue with the exquisite "Lamma Bada," followed by "Seikilos Revisited," where the embroidery of Francesco's bass is enhanced by the other artists around him. If anything this could easily be an outtake from In A Silent Way, replete with Chick Corea style keyboard, and a pattern of playing that is as relaxing as it is invigorating.

Reprising "Kucheza II," appropriately the album ends as it began, allowing the listener to float away and reflect on the voyage they have been taken on.

From Chicago, New York City, to Andalucía, Kucheza is in equal parts both mesmerising and memorable, and indeed worth serious investigation. As Joanne Brackeen once said: "Standards are tunes that somebody else wrote, and that was their freedom or their experience—but then you want to know why you came from the planet." What the MoFrancesco Quintetto provides is yet another piece to that inestimable puzzle.