Home » Jazz Articles » UADG: How to Build a City 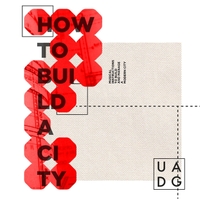 The Italian trio UADG may have been trying to illustrate a blueprint for creating a metropolis on their new album, but they probably ended up inventing a new sub-genre instead. Fusing indie, progressive rock, dream pop, improvisational and avant-garde jazz, UADG defy categorization on How to Build a City. The band build layers of atmosphere and sonic texture with each succeeding track, creating the illusion of a physical entity being raised from the ground up. This a visionary group, fueling the imagination with oddly shaped melodies. There is no easy listening here; UADG want to challenge, to stimulate, the deepest recesses of your brain.

Spiraling riffs propel "8 Steps Not to Get Lost." The title is as enigmatic as any in Radiohead's catalog, and that English band's cerebral, futurist influence can be felt throughout the record. Luca Burocchi's guitar reach the otherworldly, psychedelic heights of the War on Drugs or perhaps even Pink Floyd. This is jazz rock at its most trippy with Giorgio Panico's funky bass and Claudio Trinoli's crashing drums intensifying the tension, pushing the starstruck groove forward. "In the Event of War Tear the Bridges Down" sounds like music from a film, especially a grim one. If UADG were attempting to capture the icy stillness of a battle-torn landscape, they have truly succeeded here. UADG create a feeling of loss and isolation.

Among the most exhilarating cuts on the album is "Short Guide to the Use of Sands." Burocchi's fuzzy riffs, Panico's throbbing bass, and Trinoli's slamming drums gradually build up steam until the beat is aflame, leaving everything in the dust.

Tailors Take the Borders; Roads and Rivers Have Different Colors; Around the Corners Through the Doors; In the Event of War Tear the Bridges Down; 8 Steps Not to Get Lost; Architecture of Temples; Short Guide to the Use of Sands; Anthology of Materials.

Title: How to Build a City | Year Released: 2016 | Record Label: Self Produced