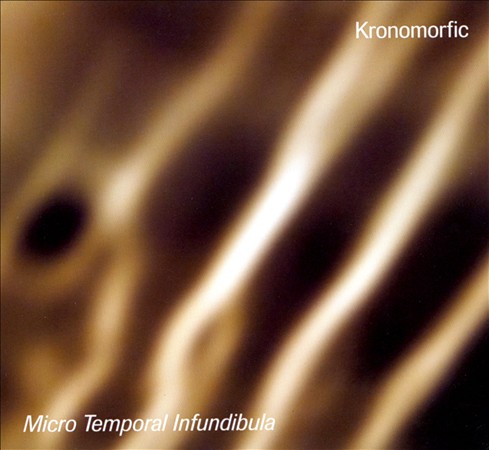 Kronomorfic, based in Southern California, is a group of virtuoso improvisers, all blending their individual talents toward a greater ensemble aesthetic. Co-led by Los Angeles drummer/hand percussionist Paul Pellegrin and San Diego saxophonist David Borgo, Kronomorfic synthesizes the ancient with the future—using very complex rhythmic strategies as the unifier.

Pellegrin and Borgo met some years back when both were students at UCLA's ethnomusicolgy department. That's where the ancient comes from: their group reflects a solid understanding of the folk music of Africa, South America and Eastern Europe. They take some of the unusual metric devices of those areas and fuse them with the thoroughly modern concept of creating structures from hybrid rhythmic phrases in polymetric time ( such as 5/3/4, 6/7/9 or 8/12/15).

Pellegrin usually constructs these ideas into forms which the melodic counterpart, key centers and improvisations are layered over. Layering is another key component of the group dynamic: one piece, "Repolarization" has the vibraphone playing in 7, the horns in 6, over a bass line in 9.

The drummer has got some serious chops. His fluid command of the trap-set is similar to Jack DeJohnette's maddeningly casual sleight-of-hand, and his hand drumming on the 7 against 5 "Jeannot's Knife" is close to hypnotic.

Borgo seems to have absorbed the history of modern saxophone into his c.v.—on tenor, he can go from a throaty Archie Shepp-type rasp to a warm honey-toned hush; on soprano, there are shades of Steve Lacy, Wayne Shorter and Dave Liebman. Most of all, the man sounds like himself—his solos on this disc are riveting—prime examples of impeccable technique serving a very creative improvising mind.

Sharing the melodic frontline is chromatic harmonica master Bill Barrett, a veteran the L.A. blues and free jazz scene. The pairing of saxophone with the harmonica is one of the factors that make Micro Temporal Infundibula such an unqualified success. Borgo and Barrett blend together so well, it's a wonder this hasn't been done more often.

Barrett is a gifted soloist who answers the question of what Toots Thielemans might have sounded like if he had apprenticed in the Art Ensemble Of Chicago. He plays a specially tuned harp that gives him access to three tri-tones—an ability he exploits to maximum effect with his frequent use of double and triple stops.

The rest of the members of Kronomorfic are just as vital to the superior ensemble sound that abounds on this disc. Vibraphonist Nathan Hubbard is often given the role of building haunting ostinatos that shift constantly, providing a modal backdrop as well as legitimate melodic generators in and of themselves. His marimba work is intricate and spell-binding, and his occasional solos are creative gems.

The young San Diego (he's since moved to New York) doublebass phenomenon Danny Weller has the extremely difficult task of performing the often staggered, loping vamps that lash the interlocking poly-meters together, and it's a task he pulls off very well. He's got a huge, woody sound, both with the bow and his fingers.

Rounding out the group is the hyper-inventive guitar/electronics specialist, Paul "Junior" Garrison, whose mission is to "never sound like a guitar." He's pretty successful in this quest. Using an arsenal of pedal and rack-mounted signal processing gear, Garrison mostly creates waves of ambience and orchestral type washes, and except for one song stays in the background. As a colorist, his thing is very effective, and Kronomorphic would sound completely different without his contributions.

The first piece, "Deprong Mori," is a strong opener. Pellegrin starts it off with a short, smart drum solo, which then yields to a haunting vibes repetition from Hubbard. After a complex melody, Borgo explodes out of the gates with a gritty tenor solo—followed by a truly inspired spot from Barrett, who utilizes bent double stops and dizzying vibrato. The out-melody builds in volume and ends on an exclamation.

"Tehuantepec" follows, with Hubbard's marimba groove reflecting a strange, off- centered, Caribbean island motif. The horns enter, layering a melody that weaves around the marimba, and coil around each other. Mallet-specialist Hubbard takes a short, intricate solo while Garrison conjures up electronic clouds of voodoo that hover in the background.

Weller's full-toned ostinato opens up "Perambulate" with a 3 against 4 feel, setting up the melancholic theme, then Barrett unleashes a wicked solo filled with wide vibrato leaps and distorted chording. Hubbard comps in a Bobby Hutcherson vein and turns in another excellent, harmonically oblique contribution. Borgo follows on soprano, first with cries and sighs, and gradually morphs into gritty, grainy vocalizations.

Garrison finally gets a short feature to open "Dendochrone Currents," and he makes the most of it, using volume pedal swells and delay units to create gauzy layers of sound not unlike the old Bill Frisell used to excel at. Barrett takes another adventurous solo, enough cannot be said of his superb musicianship.

Special guests Jeff Kaiser (on trumpet and live electronics), and Evan Adams on oboe, take things to another level on the cuts on which they appear, ( "Jeannot's Knife," and "Gnomon"). Kaiser, especially, is coming from a similar midset, (he and Borgo have their own duet). He contributes a searing trumpet solo that hones "Jeannot's Knife" to an even sharper edge.

Despite the inherent complexity of the music on this release, all of the layered polymetric claves and interlocking melodies are performed so seamlessly that the listener is left only to ponder the incredible beauty on Micro Temporal Infundibula. Highly recommended.