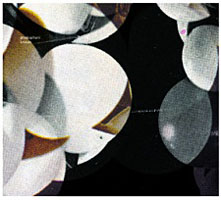 It's been six years since Phonophani, a.k.a. Espen Sommer Eide, released Oak or Rock (Rune Grammofon, 2004), though a 2006 appearance at Punkt provided a rare opportunity to witness the electronic musician at work, as he utilized a wind-driven synthesizer, in conjunction with sound samples on his laptop, to create in-the-moment melodic snippets subsequently processed, reshaped and built into a continuous, ebb and flow of a performance. Working live, of course, presents its own set of challenges, especially for someone like Eide, whose albums demonstrate almost pathological care in the collection and reformation of sound into a distinctly personal soundscapes. For the uninitiated, Phonophani opened the window into a completely different world of improvisational possibility.

Kreken continues to build on past work, including Genetic Engineering (Rune Grammofon, 2001) and the 1998 self-produced, self-titled album that started it all (reissued, with three bonus tracks, by Rune Grammofon in 2006; the reason, perhaps, for Eide's invitation to Punkt). One differentiator—for those who have difficulty finding ways to distinguish the groundswell of electronic artists of the past 15 years or so—is Eide's approach to sound processing. Rather than using standard software products to manipulate his source material, ranging from acoustic instruments to purely electronic sound inventions, Eide—a software designer—has written his own code, creating what he calls "new organisms of sound." Eide's referral to organics is especially apt; as otherworldly as much of Kreken is, there's something strangely natural about the way that Eide constructs these most unusual sound worlds.

While Phonophani is no stranger to collaboration—outré singer Maja S.K. Ratkje appeared on one of Oak Or Rock's ten tracks—Kreken is downright collaborative, with three singers appearing on four tracks, including Jenny Hval (a.k.a. rockettothesky), voice layered voice seemingly stretches to infinity on the melancholy "Mendel." David Grubbs (founding guitarist of '80s Louisville, Kentucky punk group Squirrel Bait) adds some suitably angular edge to the still ethereal "Morki," while harmonium player Sigbjørn Apeland (of 1982 Trio) guests on "Nold," actually possessing near-conventional form and sounding like a distant cousin to the quietly dramatic "Sparrowfall," from Brian Eno's Music for Films (Virgin/Astralwerks, 1978), and the more abstract landscapes of the ambient forefather's Ambient 4: On Land (Virgin/Astralwerks, 1982).

It may seem foreign to those who are tightly aligned with form, of melodic, harmonic or rhythmic nature. But Kreken possesses elements of all three, albeit in ways that twist and turn them into something altogether new. There are also found sounds (footsteps driving the pulse of "Kvaale II"), and completely constructed textures. But in Eide's hands, they all coalesce to create a curious hybrid that represents Phonophani's most thoroughly compelling—and starkly beautiful—album to date.