By Glenn Astarita
January 18, 2012
Sign in to view read count 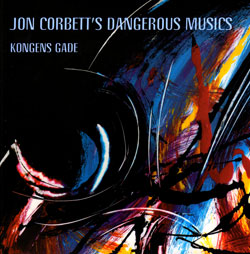 Legendary European jazz and free-jazz drummer Louis Moholo-Moholo gels to a higher-power along with prominent exponents of the British jazz scene in this egalitarian rendezvous. Led by energetic hornist Jon Corbett, who seemingly exhausts all possibilities of this expressionistic voyage, bassist Nick Stephens' limber and expansive bottom-end assists with seeding a loose but manifold structural component.

Corbett is at no loss for ideas, equating to a set modeled on extended pieces. With his bristling trumpet lines atop a fluctuating, but largely impactful set of platforms, he brackets his phrasings amid the triumvirate, where the respective musicians counter, respond, and renew subthemes and splintered mini-plots.

"Kongens Gade" features the leader's blistering trumpet lines, concocted with ascending themes, and peppered by the drummer's imploding paradiddles and snappy accents, as Stephens directs traffic with linear configurations. On other works, the trio briefly delves into the microtonal strata to balance a "hustle and bustle"-like foundation, tinted with striking contrasts and sprawling notes. Corbett's use of bamboo flute projects a mystical element to offset the band's dissections, detours and rebuilding processes.

From a freedom of expression and coherent assembly of concepts viewpoint, Kongens Gade is a standout, cloaked by the musicians' superior technical faculties and synchronous stream of thought.