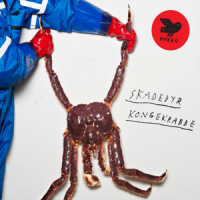 Skadedyr is a Norwegian democratic-anarchistic band comprised of 12 young and promising musicians, masterminded by tuba player Heiða Karine Jóhannesdóttir Mobeck and keyboards player Anja Lauvdal, both collaborated in the disbanded Your Headlights Are On. The 12 musicians offer unorthodox instrumental combinations— brass, guitars, vocal, two drummers, strings and accordion— and all are active on groups as the Moskus trio, as Lauvdal, Karokh and Lana Trio

Mobeck and Lauvdal compositions for Skadedyr (pests in Norwegian) debut album (king crab in Norwegian) were arranged jointly by the whole band, without notes, keeping the music and the diverse, versatile narratives of the musicians, open, fresh and and free from clichés. The album was recorded on a one day session in the studio with producer Andreas Mjøs from Jaga Jazzist.

The post-modern universe of Skadedyr succeeds magically to melt into "Partylus" quotes and excerpts from early jazz-Fats Waller ("Your Feet's Too Big"), nuevo tango of Astor Piazollaa ("Café 1930"), Bob Dylan protest song ("Like a Rolling Stone"), electronic-dance clip from Prodigy ("I'm a Firestarter") and Icelandic traditional song. This wild ride is arranged brilliantly, spiced with rockabilly-surfing guitars and the charming vocals of Ina Sagstuen.

Skadedyr is highly original and uncompromising band with exciting vision.