By Jakob Baekgaard
March 29, 2014
Sign in to view read count 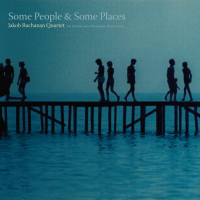 Music is invisible. Notes can't be seen as they flow from the instrument and into the ether and yet, as intangible as music is, it is also able to create portraits that embody some of the elusiveness of the past.

Danish trumpeter Jakob Buchanan possesses the unique quality of being able to transfer complex emotions into sound. Like an archeologist, he digs deep into the forgotten emotional layers of the past and transforms them into poignant paintings of sound on Some People & Some Places. On the album, he only plays with the warm, round sound of the flugelhorn.

Whether recalling the contemplative emotional state of his father on "A.D. Buchanan's Armchair Gospel" or the intense experience of his youth on "Sweet Teenage Suite," Buchanan never falls into forlorn nostalgia. Instead, he creates complex stories that at times approach otherworldly soundscapes. The former begins with guitarist Jakob Bro's skeletal blues patterns, like barbed wire blowing in the wind, before Buchanan sets in with a slow, mournful tone, while the masterful rhythm section of Marilyn Mazur and bassist Jonas Westergaard maintain the groove.

Bro, who must be considered one of the most interesting guitar stylists working today, continues to push the boundaries for his instrument, as he also does in his trio with bassist Thomas Morgan and drummer Jon Christensen. Mazur is a rhythmical wizard, always searching for new sounds, and Westergaard is one of the most versatile bassists working on the European scene. He changes effortlessly between inside and outside playing and his own album as a leader: Helgoland (Stunt, 2008) is one of the gems of modern Danish jazz.

Buchanan is in the middle of it all. He is a quiet leader who wisely gives plenty of space to his fellow sound painters. As a stylist, Buchanan has the same experimental nature as trumpeters Arve Henriksen and Rob Mazurek, but he has found his own expression where the melody is the foundation. Even at his most experimental, Buchanan is essentially playing Nordic hymns and Some People & Some Places might be the strongest musical statement so far from the Danish balladeer.