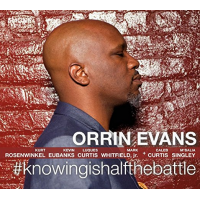 Since the 1990s Philadelphia-based pianist Orrin Evans has carved out a revered career as a band leader, producer, composer, and first and foremost, one helluva jazz pianist. Recorded live at New York's Sear Sound's Studio, #knowingishalfthebattle is his third release on Smoke Sessions with an all-star lineup that includes two other well-known Philly natives, guitarists Kevin Eubanks and Kurt Rosenwinkel.

Energy runs through the session through the virtuosic performances of the three headliners as well as the tight young rhythm section of drummer Mark Whitfield Jr. and bassist Luques Curtis admirably holding together the difficult rhythmic changes thrown at them. Add Evans' talented collaborator, singer M'Balia Singley and saxophonist Caleb Wheeler Curtis on few tracks and the set is a nice representation of Evans' music.

Evans' playing is quintessential: sparkling feats of dexterity, artistically mixing a language of jazz, blues, and urban soul in "When Jen Came In" and "Half the Battle" featuring Rosenwinkel's signature sound. Of the many highlights is a zealous rendition of David Bowie's classic "Kooks" where singer Singley contributes the perfect vocals to Bowies' quirky lyrics as Rosenwinkel navigates a serpentine solo.

In contrast to Rosenwinkel's flow, Kevin Eubanks exhibits pure ferocity in a visceral style—blistering chords and white-hot embers pouring from his axe in the soulful "Slife" and the bopping "Calls" a tune colored by a melodic hook and Curtis' searing saxophone. Both guitarists join Evans on "Heavy Hangs the Head That Wears the Crown" a powerful piece where each musician's free playing surges with intensity.

The two variations of the hashed tagged title track that bookend the set were produced by Evans' 18 year old son, Matthew. These short electronica-influenced pieces at first seem out of place with the other tracks but serve as an artistic mantra of Evans' wisdom and openness to new ideas.