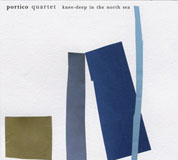 Portico Quartet are currently le dernier cri in London—awards nominations, MTV sync deals and top-end TV and radio sessions are being thrown their way like confetti. Knee Deep In The North Sea is the quartet's debut album and it proves to be great stuff, deserving of much of the media cavalcade.

Portico's USP is the inclusion of two hangs in the line-up. Two whats? Invented in the late 1990s by a pair of Swiss-based world music enthusiasts, the hang is a tuned percussion instrument which is a cross between gongs, gamelan and various other drums and bells. It can play up to nine notes tuned around a central deep tone. It looks like an elaborate Chinese cooking implement and sounds like a refined Trinidadian steel drum.

The musicians are young—aged between 20 and 22—and not long out of college, and Portico was originally conceived as a busking group. Their regular pitch was inside London's National Theatre and South Bank Arts Centre complex, a good place to win influential friends if you've got something unusual to offer.

The music, all of it original, is a cross between jazz and modern classical. It's mellifluous, exuberant and jaunty, full of catchy tunes and strong hooks. It's mostly through-written, with relatively little space given to solos (most of these by saxophonist Jack Wyllie), but it swings and has an informal, otherwise indefinable, jazz attitude.

The overall effect is light and feel-good, but it isn't bland. Wyllie from time-to-time essays convincingly, if briefly, into Albert Ayler-esque harmonics and multiphonics; there's a wide dynamic range (most of the tunes are mini-suites, each containing vividly contrasting sections); and the rhythms are sharp. And the hang is tuneful and fun.

The closest comparison, though it isn't an exact one, is perhaps with the late Penguin Cafe Orchestra. The crucial difference is that multi-instrumentalist Simon Jeffes wrote for a wider range of instruments than Portico's saxophone, bass, drums and hangs. Whether Portico would be able to sustain interest over a second album without broadening their line-up is a moot point. Meanwhile, there's plenty to enjoy in Knee Deep In The North Sea.

News From Verona; (Something's Going Down On) Zavodovski Island; Knee Deep In The North Sea; Too Many Cooks; Steps In The Wrong Direction; Monsoon-Top To Bottom; The Kon Tiki Expedition; Cittagazze; Pompidou.