Rondi Charleston: In My Life

By Geoff Mirelowitz
October 31, 2007
Sign in to view read count 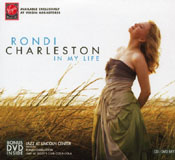 This CD, In My Life, and the accompanying DVD, Lincoln Center Presents Rondi Charleston Live! , should help this talented vocalist achieve the recognition she deserves. Two fine earlier recordings on LML Music (2001's Love Letters and 2004's Love Is The Thing) did not receive wide notice or distribution. This release, accompanied by a Virgin Megastores national in-store performance tour, should change that.

Charleston and pianist/musical director Bruce Barth have chosen an eclectic collection of material. It ranges from well-known Great American Songbook tunes, "Bewitched, Bothered and Bewildered" and "I'm Old Fashioned to the lesser-known, "Baby Don't Quit Now," by Johnny Mercer and Jimmie Rowles. It includes two Tom Jobim songs, a Bill Evans gem, the Lennon and McCartney title track and the Charleston/Barth composition, "Telescope." Sting and Carole King are also both represented. Only four selections overlap between the two discs. Charleston proves equally adept at all of it, weaving the disparate material into a memorable performance.

Charleston's voice is both polished and powerful. She is equally capable of caressing the lyrics as she does on "Waltz for Debbie" and "Estate, or swinging authoritatively as she does on the Jobim songs. "I love the tradition of jazz, says Charleston, "and how...it encourages artists to creatively move the music forward, beyond the genre, expanding one's own musical vocabulary."

Her performance of "Beautiful, from King's classic Tapestry (Ode, 1971), offers an excellent example of Charleston's rapport with tenor saxophonist Joel Frahm, lifting the song to another level, with guitarist Adam Rogers contributing one of several outstanding solos.

That rapport between Charleston and Frahm puts its stamp on much of the music. Frahm's solo on The Beatles' tune is one of many fine contributions. Barth, whose work with vocalists includes, notably, a recent stint with Tony Bennett and who shares credit for these arrangements with Charleston, also stands out. Their collaboration on "Bewitched is truly lovely. Frahm again solos impressively.

The musicians include Sean Smith on bass and Hadar Noiberg on flute, as well as Clarence Penn on drums (Alvester Garnett replaces Penn on the DVD). Some CD tracks include very tasteful and subtle strings arranged by Barth. The inclusion of the DVD adds something substantial. The CD recording stands on its own as a fine piece of work, however watching Charleston live with her talented band reinforces the impression that she is a special talent. The jazz world should take notice.