BY BRUCE LINDSAY
December 5, 2013
Sign in to view read count 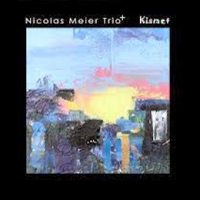 Guitarist Nicolas Meier is blessed with precise intonation, fluid technique and mastery of a range of different styles. As a composer, he mixes influences from Turkey, central Europe, Iberia and the Americas to craft accessible, melodic tunes. On Kismet his talents as musician and writer come together to create what might be his best album to date.

Meier is not only one of the jazz world's most exciting guitarists, he's also one of its more prolific recording artists. Kismet is his second album of 2013, following From Istanbul To Ceuta With A Smile (MGP Records). He's joined by his trio—Kevin Glasgow on bass, Lawrence Lowe on drums and Demi Garcia on percussion—and by a trio of guest musicians whose own contributions add a real spark to the instrumental line-up.

Meier wrote most of the tunes on Kismet, but it's his versions of three much-loved classics that best demonstrate his skill and imagination. John Coltrane's "Giant Steps" gets a Flamenco treatment, Meier's crystal-clear guitar transforming the melody into something a bit sexier than usual. Django Reinhardt's "Nuages," a guitar classic if ever there was one, gives Meier a chance to stretch out on an exquisite extended solo. On the oft-maligned "Besame Mucho" the trio of Lowe, Garcia and Glasgow lays down a slinky, slightly tongue-in-cheek rhythm and Meier's emphatic, single note, acoustic guitar phrases give the tune a seductive appeal.

Meier's own compositions are strong and cover an ambitious range stylistically and emotionally. "Reflections," co-written with his wife Songul (who also contributes the cover image), is a lushly romantic tune. Meier is on acoustic nylon-strung guitar here, complemented by the violin and cello accompaniment provided by Lizzie Ball and Bernard Gregor-Smith (Meier's bandmates in Eclectica!). "Adiguzel" is driven by Lowe's militaristic drums, the pace slowly builds to a fast tempo but Meier's precision never falters. "Kismet" takes inspiration from Turkey—more specifically, from a Turkish folk tune called "Yalan Dunya." It's a showcase for solos from Meier, on the 11-string glissentar, and from guest guitarist Cenk Erodogan. "Not For Me" is a bluesy, electric guitar workout which ends the album in an atypical but enjoyably funky fashion.