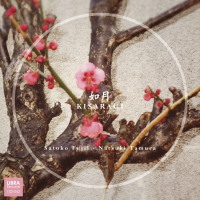 As creative pairings go, there are none who surpass trumpeter Natsuki Tamura and pianist Satoko Fujii. The husband and wife team play together in various settings from Fujii's numerous orchestras (New York, Berlin, Tokyo), the quartet Kaze, and the (now) trio formation Gato Libre. The results are never predictable. Their duo outings, more often than not, lean toward quirky lyricism. On Kisaragi, their fifth such recording, the duo opts for improvised abstractions where the emphasis is on unusual sounds.

Fujii and Tamura have polished their sympathetic musical connection in a manner that may be more obvious on Libra projects such as Clouds (2002) and Muku (2012). Where those albums draw obvious attention to the duo's affinity for engaging each other in neoclassical and more direct improvised jazz settings, Kisaragi requires deeper listening. Within the manipulations of their respective instruments, there remains the empathy that makes their work intriguing.

Opening with the title track, Tamura and Fujii play with silence and obsidian outbursts, eventually coming to a point of single-mindedness. On "Usurai," Fujii unleashes myriad effects from the prepared piano, playing inside and out, adding multiple layers of texture. Waves of sound wash over the opening of "Nowake" before Tamura and Fujii focus on more concentrated effects merged in deceptively clever interplay. At more than fifteen minutes, "Muhyo" features Tamura's sharp, penetrating bursts meeting with dense piano chords. The sound morphs into squawking duckcalls followed by the trumpet approximating the sound of a Japanese koto.

Tamura's creative integrity is behind this unusual release as it sprang from a finished project that he and Fujii chose to shelve. Feeling that the unnamed album was a bit too familiar, the duo seized on one particular track, in the vein of those on Kisaragi, and created out from that point. The duo's commitment to producing new sounds based on fresh ideas is second only to their musicianship.