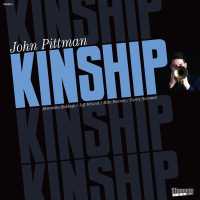 The ineluctable charms of John Pittman's music may very well be connected to the sense of fellow feeling he projects on this, his debut album. For in these eight songs, the Canadian trumpeter promotes a sense of togetherness and unity that cuts not only to the title at hand, but also to the very core of his belief system. "Kinship" isn't just some umbrella term to stand beneath; it's Pittman's purpose, plain and simple.

Opening with "Ties That Bind," a driving swinger that's paralleled Pittman's personal growth through its adoption of various incarnations and arrangements over the years, this quintet immediately establishes firm footing. The funky "For Siobhan" follows, giving pause to admire bassist Mike Downes' handiwork while nodding to Pittman's wife in disposition. Then Pittman makes a pit-stop in jaunty territory for "Homio- stasis," a number dedicated to his son; visits Lee Morgan territory with "Moray Crossing," an original groover that nods to vintage Blue Note boogaloos; and takes a stab at the Black Eyed Peas' "Where Is The Love?," using a wild and woolly fracas as a doorway to the familiar, letting baritone saxophonist Shirantha Beddage loose, showcasing pianist Jeff McLeod riding a dissolving swing shift, and returning briefly to the theme.

The final three numbers on the album continue Pittman's streak, avoiding repetition while focusing on family of varied sorts. "Reminiscing," opening with a brief Monk-ish piano rumination, comes to play toward its name as Pittman and company wax nostalgic as one; drummer Curtis Nowosad carves out a swampy NOLA-esque groove (mostly) in seven on the leader's joyful arrangement of Stevie Wonder's "As," hearkening back to the horn man's performance of the piece at his own wedding; and a relaxed "Home," focusing on an after-hours attitude and the duo of Pittman and McLeod, closes things out by painting a picture of what matters most. John Pittman, in a mere forty-five minutes, spells out the meaning of kinship in oh-so-many ways.

Ties That Bind; For Siobhan (shi-vawn); Homio-stasis; Moray Crossing; Where Is The Love?; Reminiscing; As; Home.